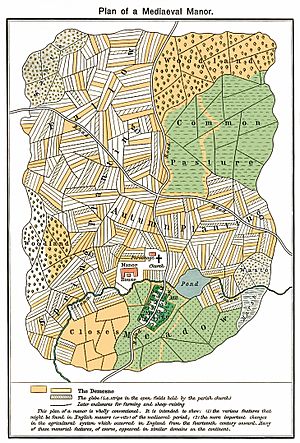 Manorialism or Seigneurialism is the name for the organization of the economy in the Middle Ages. The economy relied mainly on agriculture. Manorialism describes how land was distributed and who profited from the land.

A lord received a piece of land, usually from a higher nobleman, or from the king. When he received the land, he also received all that was on it. That means that most of the people that lived on the land also belonged to the nobleman. The people, called peasants, had to pay to the lord, or they had to work for him. This way, the nobleman could live and support his family from what he received from the peasants. He had also certain legal powers, like that of a police force. The peasants were subjects which had to pay tribute to the lord. In return they received protection.

The tribute the subjects had to pay varied. it could either be that they had to do work for their lord, or that had to pay a certain part of what they earned (like one tenth). That meant that if they grew a crop such as some form of corn, the lord got a tenth of their earnings in corn. This is also called payment in nature or sharecropping. Very rarely, it was money they had to pay. 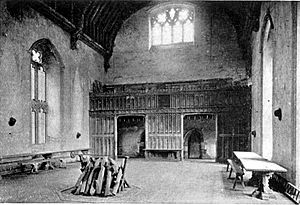 The great hall at Penshurst Place, Kent, built in the mid 14th century. The hall was of central importance to every manor, being the place where the lord and his family ate, received guests, and conferred with dependents.

Manors each had up to three different classes of land:

Sometimes the lord had a mill, a bakery or a wine-press. This could be used by the peasants against a fee. Similarly, the right to hunt or to let pigs feed in his woodland was subject to a fee. The peasants could use the lord's legal system to settle their disputes - for a fee. Single payments were due on each change of tenant. On the other side of the account, manorial administration involved significant expenses. This might be one of the reasons why smaller manors tended to rely less on villein tenure.

Dependent holdings were held by agreement of lord and tenant, but tenure became in practice usually hereditary, with a payment made to the lord on each succession of another member of the family. Villein land could not be abandoned, at least as long as every fleeing peasant was likely to starve to death; nor could they be passed to a third party without the lord's permission, and the customary payment.

Though not free, villeins were definitely not slaves: they enjoyed legal rights, subject to local custom, and had recourse to the law, subject to court charges which were an additional source of manorial income. Sub-letting of villein holdings was common, and labour on the demesne might be commuted into an additional money payment, as happened increasingly from the 13th century.

This description of a manor house at Chingford, Essex in England was recorded in a document for the Chapter of St Paul's Cathedral when it was granted to Robert Le Moyne in 1265: 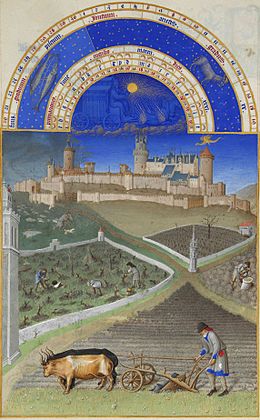 Feudal society is based on two principles, that of feudalism and manorialism. The structures of manorialism varied though. In the later Middle Ages, areas of incomplete or non-existent manorialisation persisted while the manorial economy underwent substantial development as economic conditions changed.

Not all manors had all three kinds of land: as an average, demesne accounted for roughly a third of the arable area and villein holdings rather more; but some manors consisted solely of demesne, others solely of peasant holdings. Similarly, the proportion of unfree and free tenures could vary greatly. This meant that the amount of wage labour to perform agricultural work on the demesne varied as well. The proportion of the cultivated area in demesne tended to be greater in smaller manors. The share of villein land was greater in large manors, providing the lord with a larger potential supply of obligatory labour for demesne work. The proportion of free tenements was generally less variable, but tended to be somewhat greater on the smaller manors.

Manors varied also in their geographical arrangement: most did not coincide with a single village. Often, parts of two or more villages belonged to the manor, or were shared between several manors. In those places, peasants living far from the lord's estate sometimes paid cash instead of working for the lord.

The demesne was usually not a single plot of land. It consisted of some land around the central house and estate buildings. The rest of the demesne land was in the form of strips dispersed through the manor. In addition, the lord might lease free tenements belonging to neighbouring manors, as well as holding other manors some distance away to provide a greater range of produce.

Not all manors were held by laymen lords who rendered military service or paid cash to their superior. A survey done in 1086 estimates that 17% belonged directly to the king, and that a greater proportion (rather more than a quarter) were held by bishops and monasteries. These church manors were usually larger, with a significantly greater villein area than the lay manors next to them.

The effect of circumstances on manorial economy is complex and at times contradictory: upland conditions have been seen as tending to preserve peasant freedoms (livestock husbandry in particular being less labour-intensive and therefore less demanding of villein services); on the other hand, some such areas of Europe have been said to show some of the most oppressive manorial conditions, while lowland eastern England is credited with an exceptionally large free peasantry, in part a legacy of Scandinavian settlement.

Similarly, the spread of money economy is often seen as having stimulated the replacement of labour services by money payments, but the growth of the money supply and resulting inflation after 1170 initially led nobles to take back leased estates and to re-impose labour dues as the value of fixed cash payments declined in real terms.

Today, the term is used most to refer to medieval Western Europe. A similar system was used in the rural parts of the late Roman Empire. The birthrate and population were declining. Labor was therefore the most important factor for production. Successive administrations tried to stabilise the imperial economy by freezing the social structure into place: sons were to succeed their fathers in their trade.

Councillors were forbidden to resign, and coloni, the cultivators of land, were not to move from the demesne they were attached to. They were on their way to becoming serfs. Several factors conspired to merge the status of former slaves and former free farmers into a dependent class of such coloni. Laws of Constantine I around 325 reinforced both the negative semi-servile status of the coloni and limited their rights to sue in the courts. Their numbers were augmented by barbarian foederati who were permitted to settle within the imperial boundaries.

As the Germanic kingdoms succeeded Roman authority in the West in the fifth century, Roman landlords were often simply replaced by Gothic or Germanic ones, with little change to the underlying situation. The process of rural self-sufficiency was given an abrupt boost in the eighth century, when normal trade in the Mediterranean Sea was disrupted. The thesis put forward by Henri Pirenne, disputed by many, supposes that the Arab conquests forced the medieval economy into even greater ruralisation and gave rise to the classic feudal pattern of varying degrees of servile peasantry underpinning a hierarchy of localised power centres.

All content from Kiddle encyclopedia articles (including the article images and facts) can be freely used under Attribution-ShareAlike license, unless stated otherwise. Cite this article:
Manorialism Facts for Kids. Kiddle Encyclopedia.