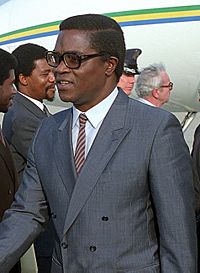 Manuel Pinto da Costa (born 5 August 1937) is a São Toméan economist and politician. He served as the first president of São Tomé and Príncipe from 1975 to 1991. He again served as the country's president from 2011 to 2016. He was a member of the Movement for the Liberation of São Tomé and Príncipe/Social Democratic Party (MLSTP/PSD) during his first presidential term but later became an independent.

Pinto da Costa was born in Água Grande. He was educated in East Germany.

All content from Kiddle encyclopedia articles (including the article images and facts) can be freely used under Attribution-ShareAlike license, unless stated otherwise. Cite this article:
Manuel Pinto da Costa Facts for Kids. Kiddle Encyclopedia.