Manus MacCloskey (April 24, 1874 – May 11, 1963) was a brigadier general in the United States Army. He served in the Philippines, participated in the China Relief Expedition, and commanded the 12th Field Artillery Regiment during World War I. After retiring from the military, he organized the Civilian Conservation Corps in North Carolina and later served as superintendent of Cook County Hospital in Chicago.

He was born in Pittsburgh, Pennsylvania on April 24, 1874. MacCloskey graduated from the United States Military Academy in 1898. 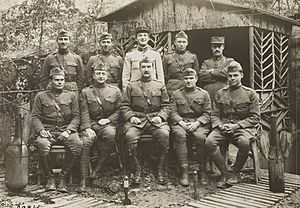 After his commissioning, he joined the Fifth Field Artillery on April 26, 1898. In 1916, he commanded Fort Myer

He served in the Philippines and participated in the China Relief Expedition.

From January 1921 to June 30, 1924, he served with the General staff at Headquarters, Sixth Corps Area. He later served at Fort Sheridan and Fort Bragg. He retired from military service on April 30, 1938.

In 1933, he organized the Civilian Conservation Corps (CCC) in North Carolina. He served as superintendent of Cook County Hospital in Chicago from 1938 to 1947.

He married Sara Monro on August 14, 1901. She was the sister of William Loftus Monro (1867–1945), president of the American Window Glass Company. They had two children: Monro MacCloskey, who would also serve in the military and rise to the rank of Brigadier General, and Sally, his daughter.

He died on May 11, 1963 in Washington, DC. He is buried at Arlington National Cemetery.

In 1977, MacCloskey's personal papers were donated to the University of Pittsburgh archives by Monro MacCloskey.

All content from Kiddle encyclopedia articles (including the article images and facts) can be freely used under Attribution-ShareAlike license, unless stated otherwise. Cite this article:
Manus MacCloskey Facts for Kids. Kiddle Encyclopedia.