Kids Encyclopedia Facts
This page is about the military installation in North Carolina. For other uses, see Fort Bragg (disambiguation).

It is one of the U.S. Army installations named for Confederate soldiers to be renamed by The Naming Commission. 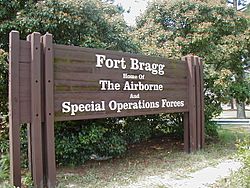 One of the signs at an entrance to the post

Camp Bragg was established in 1918 as an artillery training ground. The Chief of Field Artillery, General William J. Snow, was seeking an area having suitable terrain, adequate water, rail facilities and a climate for year-round training, and he decided that the area now known as Fort Bragg met all of the desired criteria. Camp Bragg was named to honor a native North Carolinian, Braxton Bragg, who commanded Confederate States Army forces in the Civil War.

The aim was for six artillery brigades to be stationed there and $6,000,000 was spent on the land and cantonments. There was an airfield on the camp used by aircraft and balloons for artillery spotters. The airfield was named Pope Field on April 1, 1919, in honor of First Lieutenant Harley H. Pope, an airman who was killed while flying nearby. The work on the camp was finished on November 1, 1919.

The original plan for six brigades was abandoned after World War I ended and once demobilization had started. The artillery men, their equipment and material from Camp McClellan, Alabama, were moved over to Fort Bragg and testing began on long-range weapons that were a product of the war. The six artillery brigades were reduced to two cantonments and a garrison was to be built for Army troops as well as a National Guard training center. In early 1921 two field artillery units, the 13th and 17th Field Artillery Brigades, began training at Camp Bragg. The same year, the Long Street Church and six acres of property were acquired for the reservation. The church was listed on the National Register of Historic Places in 1974.

Due to the post-war cutbacks, the camp was nearly closed for good when the War department issued orders to close the camp on August 7, 1921. General Albert J. Bowley was commander at the camp and after much campaigning, and getting the Secretary of War to visit the camp, the closing order was cancelled on September 16, 1921. The Field Artillery Board was transferred to Fort Bragg on February 1, 1922.

Camp Bragg was renamed Fort Bragg, to signify becoming a permanent Army post, on September 30, 1922. From 1923 to 1924 permanent structures were constructed on Fort Bragg, including four barracks.

Following World War II, the 82nd Airborne Division was permanently stationed at Fort Bragg, the only large unit there for some time. In July 1951, the XVIII Airborne Corps was reactivated at Fort Bragg. Fort Bragg became a center for unconventional warfare, with the creation of the Psychological Warfare Center in April 1952, followed by the 10th Special Forces Group.

In 1961, the 5th Special Forces Group (Airborne) was activated at Fort Bragg, with the mission of training counter-insurgency forces in Southeast Asia. Also in 1961, the "Iron Mike" statue, a tribute to all Airborne soldiers, past, present and future, was dedicated. More than 200,000 young men underwent basic combat training here during the period 1966–70. At the peak of the Vietnam War in 1968, Fort Bragg's military population rose to 57,840. In June 1972, the 1st Corps Support Command arrived at Fort Bragg. 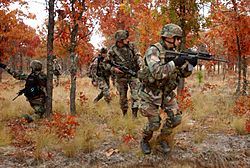 In 1990, the XVIII Airborne Corps and the 82nd Airborne Division deployed to Saudi Arabia in support of Operation Desert Shield and Operation Desert Storm. In the mid- and late 1990s, there was increased modernization of the facilities in Fort Bragg. The World War II wooden barracks were largely removed, a new main post exchange was built, and Devers Elementary School was opened, along with several other projects.

As a result of campaigns in Afghanistan and Iraq, the units on Fort Bragg have seen a sizeable increase to their operations tempo (OPTEMPO), with units conducting two, three, or even four or more deployments to combat zones. As directed by law, and in accordance with the recommendations of the 2005 Base Realignment and Closure Commission, Fort McPherson, Georgia, closed and U.S. Army Forces Command and U.S. Army Reserve Command relocated to Fort Bragg, North Carolina. A new FORSCOM/U.S. Army Reserve Command Headquarters facility completed construction at Fort Bragg in June 2011. Forces Command hosted June 24, 2011 an Army "casing of colors ceremony" on Fort McPherson and an "uncasing of colors ceremony" on August 1, 2011, at Fort Bragg. On March 1, 2011, Pope Field, the former Pope Air Force Base, was absorbed into Fort Bragg. 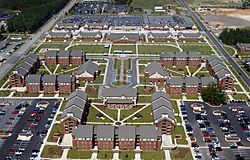 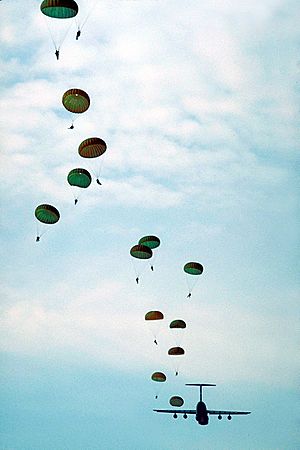 Paratroopers in training at Fort Bragg 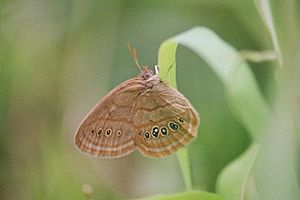 Ft. Bragg is the only locality where the endangered Saint Francis' Satyr butterfly (Neonympha mitchellii francisci) is known to occur. St. Francis’ satyr is found in wetland habitat dominated by graminoids and sedges such as abandoned beaver dams or along streams with active beaver complexes.

Fort Bragg fever, a bacterial zoonotic disease, has been named after it, in reference to an outbreak in 1942.

In 1990, the endangered red-cockaded woodpecker came under the protection of the U.S. Fish and Wildlife Service. This caused a tremendous problem for Fort Bragg, where many of these birds lived. Training stopped, ranges were closed, and troops were temporarily moved to other installations for training.

The Army and the conservationists eventually came to an agreement, which put in place training restrictions around the woodpeckers' habitat. White stripes were painted on trees to indicate the location of the habitats, and restrictions limited the scope and duration of training that could take place within 200 feet of these locations.

Today, the clusters of woodpeckers has more than doubled in size (200 to 493), and many of the training restrictions have been lifted.

Corvias-managed housing under IMCOM is attracting national attention because of reports of lead contamination, black mold, and asbestos from base residents.

Actress Martha Raye is buried on Fort Bragg in commemoration of her work with the USO during World War II and Vietnam.

All content from Kiddle encyclopedia articles (including the article images and facts) can be freely used under Attribution-ShareAlike license, unless stated otherwise. Cite this article:
Fort Bragg Facts for Kids. Kiddle Encyclopedia.