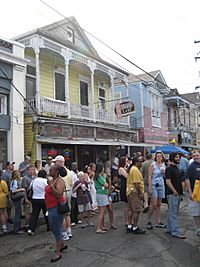 Exterior view of the Maple Leaf on Oak Street in 2007

The Maple Leaf Bar is a music performance venue in New Orleans, Louisiana. It is also a bar and hosts other events. 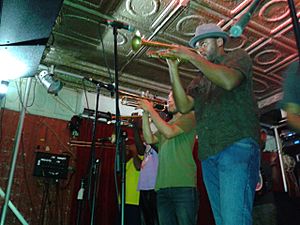 The Maple Leaf is on Oak Street in the Carrollton neighborhood. Opened on Feb 24, 1974, it is one of the longest continuing operations of New Orleans' music clubs with live performances seven nights a week.

On the first night Andrew Hall's Society Jazz Band played and were there every Saturday for seven years. Many of the old time musicians were featured, including members of the Preservation Hall Jazz Band. The Society Jazz Band left in the summer of 1981 but have played there several times since then, including the 30th birthday party in 2004 and the 40th birthday party in 2014. Musical styles represented include blues, funk, R&B, rock, zydeco, jazz, jam bands.

In recent history, the bar has weekly hosted residencies from acts such as Tank and the Bangas, The Revivalists, George Porter Jr., Jon Cleary (musician) and Johnny Vidacovich. Porter still holds a weekly, Monday night residency at the bar with his trio, featuring Terrence Houston, and Michael "Goldenthroat" Lemmler.

Poet Everette Maddox was so closely tied to the venue that his ashes are buried in the bar's patio area. The Maple Leaf hosts poetry readings and fashion shows. The Krewe of OAK starts and ends its parades at the Maple Leaf, where it holds its Krewe Ball.

The Maple Leaf was closed for several weeks in the aftermath of Hurricane Katrina. Owner Hank Staples remained in New Orleans to guard the bar and his other properties while vowing in interviews with to host the first concert in New Orleans after the storm. On September 30, 2005, Walter "Wolfman" Washington played the Maple Leaf's first post-Katrina show in New Orleans. (Some other local musicians who were playing in the aftermath of the storm dispute the claim that it was the city's first post-Katrina public performance, but this was the first to generate such sizable crowds and media attention.) That night many of the journalists, cameramen, and crew from NBC News and other media outlets joined the party and recorded the event. The band's equipment was powered by a diesel generator because electricity had not yet been restored to most of the city. The concert was shut down by police and National Guard because the city was under a curfew. Electricity was restored to this section of the city about a week later.

All content from Kiddle encyclopedia articles (including the article images and facts) can be freely used under Attribution-ShareAlike license, unless stated otherwise. Cite this article:
Maple Leaf Bar Facts for Kids. Kiddle Encyclopedia.