Carrollton is a neighborhood of uptown New Orleans, Louisiana, USA, which includes the Carrollton Historic District. It is the part of Uptown New Orleans farthest up river from the French Quarter. It was formerly a separate town incorporated in 1833, and was annexed by New Orleans in 1874 (becoming the 16th Ward and 17th Ward of the city) but has long retained some elements of distinct identity. 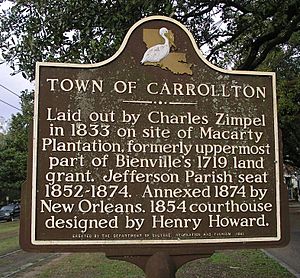 Historically the boundaries of the city of Carrollton were the Mississippi River, the downriver border of Jefferson Parish, Louisiana, Fig Street, and Lowerline Street. As Lowerline is a small street, some people think of the neighborhood of Carrollton as extending two blocks further to the larger thoroughfare of Broadway. The area on the river side of Claiborne Avenue is sometimes referred to as "Old Carrollton". The incorporation of Carrollton creates an apparent anomaly in New Orleans street names; Lowerline is upriver from Upperline Street, which was originally the upriver boundary of another suburb annexed in the 1850s.

During the American Civil War, Carrollton soon fell under Union control. Historian John D. Winters in his The Civil War in Louisiana (1861), reports that soldiers in Carrollton were heavy whiskey drinkers. A young officer complained that "one-fifth of the regiment keeps drunk all the time." Post commander General John W. Phelps permitted the men to drink because he thought that they "must have whisky or die of country fever." General Benjamin F. Butler, from time to time, issued orders forbidding the public sale of liquor. Butler's brother, Andrew J. Butler, who held no official capacity, then petitioned his brother to lift the ban. Andrew Butler monopolized the liquor trade and brought cattle into the area from Texas and flour from the North. Winters describes Andrew Butler as "a jolly, fat man who could be as hard as nails where a dollar was concerned. [He] quickly established a monopoly on all groceries, breadstuffs, medicines, and staples brought into [New Orleans]. He seized and operated a city bakery that was the only breadmaking establishment allowed in the city. Many in New Orleans considered the Butler brothers "on the make," and persons needing official favors were more likely to succeed if they were on good terms with Andrew Butler.

The main street is broad Carrollton Avenue, lined with live oaks, with the St. Charles Avenue Streetcar running on the "neutral ground" or central median. The streetcar barn is a block off the avenue in Carrollton, on Willow St., and the landmark Camellia Grill diner is near the corner of St. Charles and Carrollton Avenues. The old Neoclassical Carrollton court house building is on Carrollton Avenue near the Mississippi; as of 2011 it houses Audubon Charter Middle School.

The neighborhood and Avenue are pronounced "kaa-rull-ton" or "kaa-ril-tin" by residents and other uptowners, but many people from the downtown parts of New Orleans (especially those born in the mid 20th century and earlier) pronounce the names as "Karl- ton".

Tulane University and Loyola University New Orleans are just a few blocks below Carrollton, and many students, faculty, and staff live in the area and patronize the businesses there.

In addition to Carrollton Avenue and Saint Charles Avenue, the neighborhood still retains two "neighborhood main streets" of mixed residential and commercial use. Lower Carrollton centers on Maple Street, with many restaurants, coffee houses, bars, and upscale shops. Upper Carrollton has Oak Street, formerly hosting somewhat larger businesses (such as Woolworth); current businesses there range from restaurants and a hardware store to the best known of the neighborhood's live music venues, the Maple Leaf Bar.

In the Northwest section of Carrollton on Claiborne Avenue is Palmer Park, which hosts some moderate sized live music festivals each year. The park has a monument to the Carrolltonians who died in World War I. After Hurricane Katrina, Palmer Park has hosted the monthly Mid-City art market, displaced from the more severely damaged Mid-City neighborhood.

The historically predominantly African-American part of Carrollton along the riverfront has been known since the mid 20th century as "Black Pearl." Mahalia Jackson, the "Queen of Gospel music", was from the Black Pearl section of Carrollton.

This part of Carrollton is documented as the location of "Rising Sun Hall" near the riverfront in the late 19th century, which seems to have been a building owned and used for meetings of a Social Aid & Pleasure Club, commonly rented out for dances and functions. This is one proposed possible inspiration for the legendary song House of the Rising Sun.

Most of Carrollton has long been ethnically mixed, with "free people of color" owning homes in other parts of the town before the Civil War. Many immigrants from Germany, Ireland, and other parts of the United States settled here in the 19th century.

The post of "mayor of Carrollton" survived to the 1980s, although it was an informal one, representing the concerns of the neighborhood to the New Orleans city council.

As of 2004, the United States Postal Service still delivers mail addressed either as "Carrollton, Louisiana" or "New Orleans, Louisiana." The ZIP Code is 70118.

During New Orleans Mardi Gras celebrations, the Krewe of OAK parades through Carrollton. The Phunny Phorty Phellows krewe also holds its "parade" in Carrollton, throwing beads from the streetcar.

All content from Kiddle encyclopedia articles (including the article images and facts) can be freely used under Attribution-ShareAlike license, unless stated otherwise. Cite this article:
Carrollton, New Orleans Facts for Kids. Kiddle Encyclopedia.