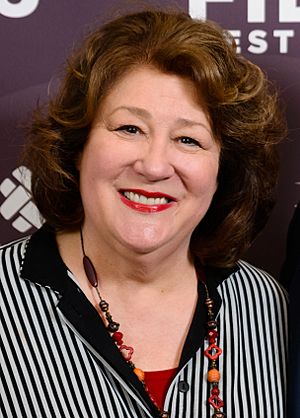 Margo Martindale (born July 18, 1951) is an Emmy Award winning American actress. She was born in Jacksonville, Texas. She has acted in many movies, stage plays and TV series.

In 2011, She won the Emmy Award for "Outstanding Supporting Actress In A Drama Series" for her acting as Mags Bennett on the TV series Justified.

All content from Kiddle encyclopedia articles (including the article images and facts) can be freely used under Attribution-ShareAlike license, unless stated otherwise. Cite this article:
Margo Martindale Facts for Kids. Kiddle Encyclopedia.