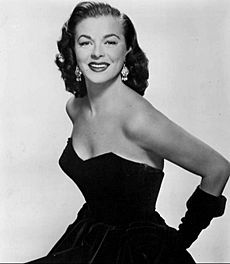 Marguerite Chapman (March 9, 1918 - August 31, 1999) was an American movie and television actress of the 1940s through 1970s. Born on March 9, 1918, in Chatham, New York, she originally was working as a telephone operator in White Plains, New York, until she went to work as a model for the John Powers Agency in New York City where she was featured in several pictorials and magazine covers. She arrived in Hollywood in December 1939. Her first movie was in 1940. She appeared in 75 features, some of which include A Man's World (1942), The Seven Year Itch (1955), and The Amazing Transparent Man (1960). She also made guest appearances on such syndicated television programs as Hawaii Five-O, Marcus Welby, M.D., Laramie, Police Story, and Barnaby Jones. She retired from acting in 1977. She lived in Burbank, California, until her death on August 31, 1999.

All content from Kiddle encyclopedia articles (including the article images and facts) can be freely used under Attribution-ShareAlike license, unless stated otherwise. Cite this article:
Marguerite Chapman Facts for Kids. Kiddle Encyclopedia.