Market Deeping is a market town in the South Kesteven district of Lincolnshire, England, on the north bank of the River Welland and the A15 road. The population of the town at the 2011 census was 6,008. 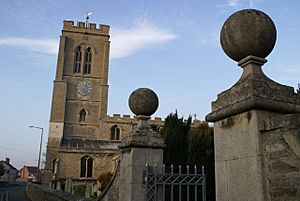 The town's market has been held since at least 1220.

On 15 September 1995 Anne, Princess Royal visited the Manor House on Church Street, as Patron of SENSE (for deafblind people).

Market Deeping is the second largest of The Deepings after Deeping St James. The river forms the border with the Peterborough unitary authority area.

The town is known for its stone buildings dating back to the 17th century, its largely 15th century church dedicated to St. Guthlac and the remains of a market cross.

The current mayor is Wayne Lester.

The parish of Market Deeping falls within the Diocese of Lincoln and the town's Anglican church is dedicated to St Guthlac. It is situated on Church Street. The Catholic Church of St Mary and Guthlac is on Hereward Way'. There is also a Methodist and a Baptist church. 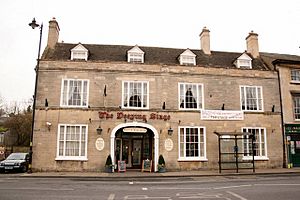 The Deeping Stage Hotel is in Market Place and Old Coach House public house is by the River Welland. Other Deeping pubs are The Vine, The White Horse, The Bull, the Towngate Inn Hotel, the Deeping Stage and The Stone Loach.

The town has an award winning fish and chip shop, The Boundary, which won the East of England Fish and Chip Shop of the Year award in 2007, "one of the top ten in the country."

Local radio is provided by Radio Cambridgeshire and BBC Lincolnshire. The area is one of the few in Lincolnshire to be covered by a local DAB multiplex - NOW Peterborough.

Newspapers covering Market Deeping, based in larger towns nearby, are the Stamford Mercury and the Peterborough Evening Telegraph. There is also the local Deeping Marketplace publication.

Market Deeping's football team is Deeping Rangers F.C., formed in 1964. The local rugby union club is Deepings Rugby Union F.C.; its 1st XV were Champions of Midlands 6 East (South) in 2007. The girls' football team is the Deeping Diamonds F.C. There is also Deepings Swimming Club, Woody Heights skate park in nearby Deeping St James, and a BMX track adjacent to the remains of the original 1980s track, located on the John Eve Playing Field. The Bourne Deeping Hockey Club has recently been formed.

All content from Kiddle encyclopedia articles (including the article images and facts) can be freely used under Attribution-ShareAlike license, unless stated otherwise. Cite this article:
Market Deeping Facts for Kids. Kiddle Encyclopedia.