The engine is finely decorated, with doric style columns and acanthus leaves. 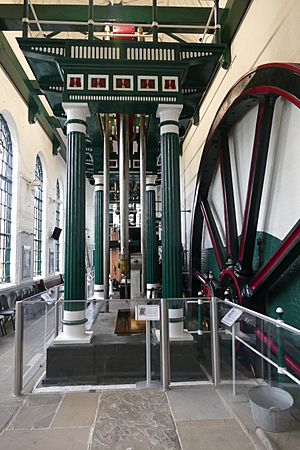 The 27 ft flywheel on display

The sewage works opened in 1864 - the engine was built in 1886 and commissioned in 1888, it was used continuously from then until 1905, when it was relegated to occasional duty for stormwater pumping. The works were finally closed for operation in 1964.

Over £3 million has been spent on restoring the engine, building and surrounding grounds, a full restoration of the park was completed by April 2010, and the park, museum, and beam engine re-opened for public access. The funding was secured through various sources including the Heritage Lottery Fund, Football Foundation, DCLG and Big Lottery Fund. The engine is now occasionally run for public display.

All content from Kiddle encyclopedia articles (including the article images and facts) can be freely used under Attribution-ShareAlike license, unless stated otherwise. Cite this article:
Markfield Beam Engine and Museum Facts for Kids. Kiddle Encyclopedia.