Kids Encyclopedia Facts
This page is about the flagship store location. For the building in Oak Park, see Marshall Field and Company Store (Oak Park, Illinois).

The Marshall Field and Company Building, which now houses Macy's State Street in Chicago, Illinois, was built in two stages—north end in 1901–02 (including columned entrance) and south end in 1905–06, and was the flagship location of the Marshall Field and Company and Marshall Field's chain of department stores. Since 2006, it is the main Chicago mid-western location of the Macy's department stores. The building is located in the Chicago "Loop" area of the downtown central business district in Cook County, Illinois, U.S.A., and it takes up the entire city block bounded clockwise from the west by North State Street, East Randolph Street, North Wabash Avenue, and East Washington Street.

Marshall Field's established numerous important business "firsts" in this building and in a long series of previous elaborate decorative structures on this site for the last century and a half, and it is regarded as one of the three most influential establishments in the nationwide development of the department store and in the commercial business economic history of the United States. Both the building name and the name of the stores formerly headquartered at this building changed names on September 9, 2006 as a result of the merger of the previous May's Department Stores (Marshall Field's former owner and parent) with the Federated Department Stores which led to the integration of the Marshall Field's stores into the Macy's now nationwide retailing network.

The building, which is the third largest store in the world, was both declared a National Historic Landmark and listed on the National Register of Historic Places on June 2, 1978, and it was designated a Chicago Landmark on November 1, 2005. The building architecture is known for its multiple atria (several balconied atrium - "Great Hall") and for having been built in stages over the course of more than two decades. Its ornamentation includes a Louis Comfort Tiffany, (1848–1933), (later Tiffany & Co. studios of New York City) mosaic vaulted ceiling and a pair of well-known outdoor street-corner clocks at State and Washington, and later at State and Randolph Streets, which serve as symbols of the store since 1897. 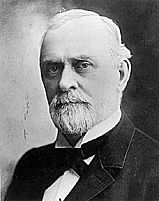 Sequence of store fronts at North State & Washington Streets corner, broken by the aftermath of the 1871 Great Chicago Fire 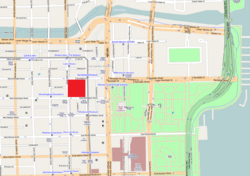 Although the official corporate name of the retail entity based in this building had been Marshall Field & Company (nicknamed Marshall Field's) from 1881 until 2006, the store has had five different names since its inception in 1852 as P. Palmer & Co. In 1868, after bowing out of involvement in day-to-day operations with his new partners of Field, Palmer & Leiter, Potter Palmer convinced Marshall Field and Levi Leiter to move the Field, Leiter & Co. store to a building Palmer owned on State Street at the corner of Washington Street. After being consumed by the "Great Chicago Fire" and splitting the wholesale business from the retail operations, the store resumed operations at State and Washington in a rebuilt structure, now leased from the Singer Sewing Machine Company. In 1877 another fire consumed this building, and when a new Singer Building was built to replace it at the same location in 1879, Field then put together the financing to purchase it. The business has remained there ever since, and it has added four subsequent buildings to form the integrated structure that is now called the "Marshall Field and Company Building."

Chicago's retailing center was State Street in the famous downtown "Loop" after the "Great Chicago Fire" of 1871, and this center has been anchored by Marshall Field's and its predecessor companies in this building complex. However, commuter suburbs began to have significant retail districts by the 1920s. In the 1920s, the store created new suburban locations such as Marshall Field and Company Store to remain competitive. After 1950, with the booming post-World War II economic/social climate with increasing suburban residential and commercial development, saw the construction of first "strip" shopping centers, followed by regional enclosed shopping malls along major thoroughfares and interstate highways such as the "Magnificent Mile" reduced the role of the "Loop"'s daily significance to many Chicagoans as downtown retail sales slipped and gradually additional business moved outward following first the streetcar lines and then the automobile. Eventually, there was an influx of stores from other parts of the country as the pace of commercial retailing merged, consolidating, and spreading first regionally then nationwide. Nonetheless, the Marshall Field and Company Building has survived at this location. However, with the merger and conversion to Macy's the emphasis of the store changed and store-branded lines replaced many designer labels, such as Dolce & Gabbana, Prada, Miu Miu and Jimmy Choo, which led to the disassembly of several designer departments of the former Field's (see picture below).

On September 9, 2006, at the time of the stores merger and conversion, the name of the building was officially changed to "Macy's at State Street". Around this time of the conversion of Marshall Field's to Macy's the building was also the location of vociferous and outraged picketing and protesting by opponents of the merger/conversion and the growth in general of massive business mergers and economic consolidation across the country. After buying out his various partners over the early post-Civil War era, Marshall Field founded the Marshall Field & Company corporate entity that survived 152 years and had arranged before his death, to have this building constructed. The sentimental objections to the conversion that both eliminated the existence of the corporate entity bearing his name and renaming the building bearing his name were widely reported in the national media of newspapers, radio and television.

The store housed a business that established new retailing standards and broke many retailing conventions of the day. The company quickly became successful, and by the 1880s it was one of the three largest retailers in the country. Before Marshall Field's death in 1906, his company became the largest wholesale and retail dry goods enterprise in the world. The Marshall Field & Company offered the first bridal registry, provided the first in-store dining facilities and established the first European buying office. The former store also was the first to provide personal shopping assistants. In the early 1900s, annual sales topped $60 million, and buying branches were located in New York City, London, Paris, Tokyo, Stockholm and Berlin.

The building continues to be the second largest store in the world. Marshall Field took over the operations of the store in 1881 and became the first merchant to post the price of the goods in plain sight, which eliminated the common practice of haggling and charging whatever the buyer would pay. On top of that, Field stood behind his product with his famous slogan that symbolized his willingness to refund the full price of all merchandise (a policy inherited from early mentor and partner Potter Palmer) purchased in his store:

Give the lady what she wants.

The current building has several atria: A Louis Comfort Tiffany mosaic vaulted ceiling dome caps a 5-story balconied atrium in the southwest corner; the northwest section has a 13-story skylit atrium, and a newer atrium with a fountain in the center is bridged by double escalator banks. Crafted by a group of 50 artisans over 18 months, the Tiffany ceiling is over 6,000 square feet (560 m2) and made up of 1.6 million pieces of iridescent glass. It is the first iridescent glass dome and it continues to be the largest glass mosaic of its kind. Only Egypt's 3,000-year-old Temple of Karnak, with its 70-foot (21 m) columns rivals the four 50-foot (15 m) Ionic-style capped granite columns on the State Street façade. The building is estimated to be 150.68 feet (45.93 m) high.

[[Filee:20070502 108 North State Street (2).JPG|thumb|left|Marshall Field and Company Buildings front facade on North State Street, pictured behind adjacent "Block 37" construction project underway across State Street.]] The building is known for its two exterior clocks, which weigh about 7.5 short tons (6.7 long tons) each, on its northwest and southwest corners along State Street at both Randolph and Washington Streets. The southwest clock at the original Washington Street intersection, known as "The Great Clock", was installed on November 26, 1897. Marshall Field envisioned the clock as a beacon for his store which he viewed as a meeting place. The clock was installed after the southwest corner of the store had become a popular meeting place and people began leaving notes for one another on the Marshall Field's windows. The clock was an attempt to end this practice, and encourage punctuality.

Today, the building is located at 111 North State Street, between Washington and Randolph Streets, within the designated "Loop" Retail Historic District of the Chicago "Loop", across State Street from the "Block 37" future construction project, across Randolph Street from the Joffrey Tower, and across Wabash Avenue from The Heritage at Millennium Park. An underground public concourse connects the basement to 25 East Washington Street, which formerly housed the Marshall Field's Men's Store. The building is a major hub for the "Chicago Pedway".

All content from Kiddle encyclopedia articles (including the article images and facts) can be freely used under Attribution-ShareAlike license, unless stated otherwise. Cite this article:
Marshall Field and Company Building Facts for Kids. Kiddle Encyclopedia.