Mary Baltz was the first woman soil scientist officially assigned in the field for the Soil Conservation Service.

After graduating from Cornell University, Baltz joined the soil survey as a Junior Soil Surveyor in 1946 and later became a Survey Party Chief.

Labor shortages during World War II gave her the opportunity to work in a job that, up to that time, had been reserved for men. By 1951, Baltz was responsible for soil mapping on farms in Madison, Oneida and Lewis counties in the state of New York, and was later assigned the task of map measurement for the entire state. The work was done by cutting out the soil map delineations on copies of the field sheets and then weighing the areas with the same label. The weight was later converted to acres.

Baltz hired the team of women to work with her in the winter months. 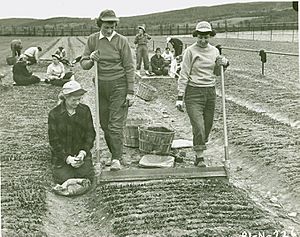 Mary Baltz was mentioned in a Forgotten Superheroes of Science section of The Skeptics' Guide to the Universe podcast, episode #633.

All content from Kiddle encyclopedia articles (including the article images and facts) can be freely used under Attribution-ShareAlike license, unless stated otherwise. Cite this article:
Mary C. Baltz Facts for Kids. Kiddle Encyclopedia.