Massena is a village in St. Lawrence County, New York, United States. The village is named after André Masséna, one of Napoleon's generals.

The Village of Massena is at the southwestern town line of the Town of Massena, with a small southeastern section of the community spilling into the Town of Louisville, and a tiny portion in the Town of Norfolk. The village is located near the northern border of the county.

The village was first settled circa 1803. Part of its early growth was based on neighboring medicinal springs. André Masséna was one of the original eighteen Marshals of France created by Napoleon.

Massena is the hometown of Baseball Hall of Fame member Bid McPhee, who was born there in 1859. Voice actor Hal Smith spent a significant part of his early years living in Massena. He graduated from the Massena High School in 1936.

In 1928, Massena was the site of a blood libel against its small Jewish community. Its history has been recorded by the town's longstanding newspaper, The Courier-Observer, formerly named The Massena Observer.

Throughout the mid 20th century, Massena experienced enormous growth due to the construction of the Franklin D. Roosevelt power project and the Eisenhower locks which helped connect the Atlantic Ocean to the Great Lakes via the St. Lawrence River. Massena established itself as the manufacturing center of St. Lawrence county with Aluminum Company Of America (Alcoa) plant, Reynolds Metals plant (now Alcoa) and a General Motors Powertrain plant (dismantled in 2011). The Alcoa East plant was temporarily idled in 2009, but began to restart pot lines in January 2011.

The village has experienced a decline in population in recent decades largely due to its eroding industrial base and incomes. The unemployment and crime rates for the village had doubled in the past decade. The village tax rates have gone up a whopping 52 percent since 2004. The government blames it on growing employee union increased pay demands and pension funds.

Many of the Main Street's storefronts of downtown remain vacant. Some of the abandoned buildings along Water Street have been torn down as well. Various vacant homes throughout the town have burned or also been torn down. Furthermore, the St. Lawrence Centre Mall, once a thriving shopping center, has seen nearly 90% of its stores close their doors at the mall, while many simply left the town altogether. The crime rate of Massena has gone up dramatically in the past 10 years with a current war on drugs being fought by former police chief and current village mayor Tim Currier. An effort to change the community into a productive and positive direction has been started since 2013.

The Robinson Bay Archeological District was listed on the National Register of Historic Places in 1977.

The village is located on the banks of the Grasse River and the Raquette River and on the shore of the St. Lawrence River. Robert Moses State Park is located northeast of the village. The Eisenhower Lock System is located around the area before the State Park, was established in 1954 and has been running since. 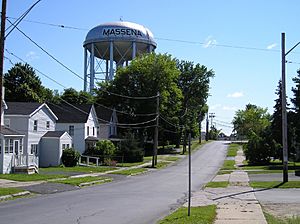 All content from Kiddle encyclopedia articles (including the article images and facts) can be freely used under Attribution-ShareAlike license, unless stated otherwise. Cite this article:
Massena (village), New York Facts for Kids. Kiddle Encyclopedia.