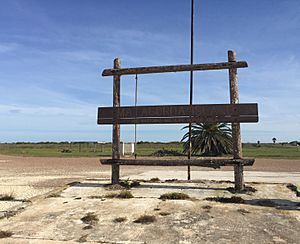 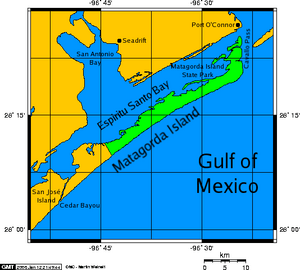 A map of Matagorda Island. 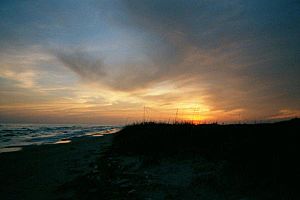 i/ˈmætəˈɡɔərdə/), Spanish for "thick brush," is a 38-mile (61 km) long barrier island on the Texas Gulf coast, located approximately seven miles (11 kilometres) south of Port O'Connor, in the southernmost part of Calhoun County. Traditional homeland of the Karankawa Indians. The island is oriented generally northeast-southwest, with the Gulf of Mexico on the east and south, and Espiritu Santo Bay on the west and north. It is separated from San José Island to the south by Cedar Bayou, and is separated from the Matagorda Peninsula to the north by Pass Cavallo. It has no permanent residents and is accessible by boat only. It has a land area of 157.25 square kilometres (60.71 square miles).

The land that is now Matagorda Island State park was acquired in 1940 by condemnation from the Hawes, Hill, and Little families (but not the Wynne-Murchison interests) for use as a temporary training facility for the World War II era.

Matagorda Island State Park was featured as a "survival location" by the main characters in the book, 'Day by Day Armageddon' by J.L. Bourne. The island is also featured as a principle location in the book Powersat by Ben Bova. Life on the island in the late 1800s is described in the book "A Texas cowboy, or, Fifteen years on the hurricane deck of a Spanish pony" by Charles A. Siringo

The climate in this area is characterized by hot, humid summers and generally mild to cool winters. According to the Köppen Climate Classification system, Matagorda Island has a humid subtropical climate, abbreviated "Cfa" on climate maps.

All content from Kiddle encyclopedia articles (including the article images and facts) can be freely used under Attribution-ShareAlike license, unless stated otherwise. Cite this article:
Matagorda Island Facts for Kids. Kiddle Encyclopedia.