Matthew Clayton Flynn (born June 20, 1985) is an American football quarterback. He was drafted by the Green Bay Packers in the 7th round of the 2008 NFL Draft. He played college football at LSU.

In 2004, Flynn was a third string quarterback as a redshirt freshman, behind starter Marcus Randall and backup JaMarcus Russell. He was also LSU's holder on placekicks. Flynn played in all 12 games, but only three games at quarterback. His collegiate first complete throw went to Xavier Carter for a 67-yard touchdown against Mississippi State. Flynn also made a short appearance in the 2004 Capital One Bowl. In that game, he completed 1 of 4 passes for 11 yards in a 25-30 loss against Iowa. He finished the year by completing 4 of 10 passes for 99 yards and 1 TD.

When Randall left the team, Russell and Flynn fought for the starting QB position. Russell got the job. Flynn was the backup. Flynn played in seven games at quarterback for the Tigers in 2005. He completed 27 of 48 passes for 457 yards, 7 touchdowns and 1 interception. In a win over North Texas, Flynn threw 7-of-7 for 139 yards and 3 TDs, all in the fourth quarter. In the 2005 SEC Championship Game against the Georgia Bulldogs, starting quarterback Russell was injured. Flynn finished the game. He was then made the main quarterback for the Tigers in the 2005 Chick-fil-A Peach Bowl against the University of Miami Hurricanes. In that game, he led the Tigers to a 40-3 win over Miami. 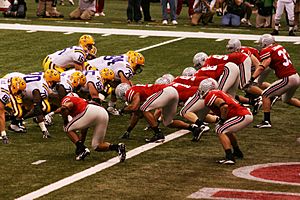 When Russell was drafted by the Oakland Raiders, Flynn finally became a starter as a fifth-year senior. He started every game that season except the SEC Championship in which he was injured.

On January 7, 2008, Flynn led LSU to a BCS National Championship. They beat Ohio State 38-24. Flynn was named offensive MVP of the game.

Flynn was drafted by the Green Bay Packers in the 7th round (209th overall) of the 2008 NFL Draft. On July 23, he was signed to a four-year contract through the 2011 season. He is now Green Bay's second-string quarterback. He won the back-up role to Aaron Rodgers by beating out fellow rookie and second-round pick Brian Brohm. The battle for the second-string position became the most interesting battle in camp. Flynn was seen as being less talented than Brohm because of Brohm's larger size, and better arm and foot speed.

On December 19, 2010, Flynn made his first NFL start against the New England Patriots because starting quarterback Aaron Rodgers was hurt. Flynn threw three touchdown passes. He threw one each to John Kuhn, James Jones and Greg Jennings against New England. He also threw an interception that was returned for a touchdown by Kyle Arrington. The Packers lost the game 31-27. Flynn completed 23 of 37 passes for 254 yards in the loss, and was praised for his good work

On January 1, 2012, the Packers were the #1 seed and rested most of their starting players., Matt Flynn started the final game of the season against the Detroit Lions. He threw for 480 yards and 6 touchdowns in the 45-41 victory. both of these statistics set all-time Green Bay Packers records, and got many other teams interested in signing Flynn as a starter.

Flynn was signed by the Seattle Seahawks in mid-March of the 2012 offseason to a 3-year deal worth up to $26 million and $10 million guaranteed.

All content from Kiddle encyclopedia articles (including the article images and facts) can be freely used under Attribution-ShareAlike license, unless stated otherwise. Cite this article:
Matt Flynn Facts for Kids. Kiddle Encyclopedia.