Mazeppa is a city in Wabasha County, Minnesota, United States, along the North Fork of the Zumbro River. The population was 842 at the 2010 census. 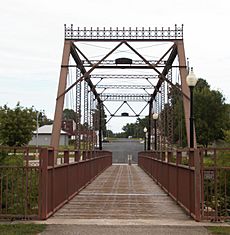 The Walnut Street Walking Bridge crosses the Zumbro River in Mazeppa and is on the National Register of Historic Places.

Mazeppa was platted in 1855, and named in honor of Hetman Ivan Mazepa via a poem by Lord Byron. The city was incorporated in 1877.

Minnesota State Highway 60 serves as a main route in the community.

There were 337 households, of which 32.6% had children under the age of 18 living with them, 59.6% were married couples living together, 6.2% had a female householder with no husband present, 3.6% had a male householder with no wife present, and 30.6% were non-families. 25.2% of all households were made up of individuals, and 11% had someone living alone who was 65 years of age or older. The average household size was 2.50 and the average family size was 3.01.

Students attend the Zumbrota-Mazeppa Public schools jointly with students from the nearby town of Zumbrota as of fall 1987. Their mascot, the cougar, is a deviation from the original mascot of the Indians for Mazeppa and the tigers for Zumbrota. The present school colors are blue and silver.

All content from Kiddle encyclopedia articles (including the article images and facts) can be freely used under Attribution-ShareAlike license, unless stated otherwise. Cite this article:
Mazeppa, Minnesota Facts for Kids. Kiddle Encyclopedia.