McFarland is a village in Dane County, Wisconsin, United States, on the eastern shore of Lake Waubesa. The population was 7,808 at the 2010 census. Its ZIP code is 53558. McFarland is part of the Madison Metropolitan Statistical Area. 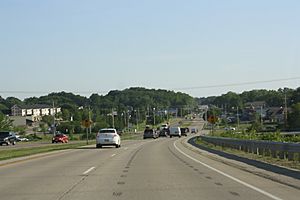 McFarland was founded in 1856 by William H. McFarland. Early industries in the village included harvesting winter ice and fish on nearby Lake Waubesa for rail shipment to markets in Chicago. Later, a small resort industry developed in an area called Edwards Park near the lake. After World War II, the village became a bedroom community for Madison. In the 1960s, Lloyd Schneider, a local lawyer, led an effort to have petroleum tank farms north of the village that were connected to the Koch pipeline. Because they became part of the village's tax base, their construction enabled the McFarland School District to fund a new high school. In 1989 a major highway project on the nearby Madison highway called the Beltline made commuting to the village much easier and enabled rapid residential growth.

On June 17, 1992, an F3 tornado destroyed several dozen homes and injured several people in Waubesa Heights, a nearby housing development in the Town of Dunn, in the McFarland School District. At $18.0 million in damage this was the third-costliest tornado in Wisconsin's history behind the Oakfield and Barneveld F5s.[1]

The village celebrated its sesquicentennial in 2006. Among the festivities were banners on light poles, activities such as the Taste of McFarland, and live music at the Gazebo near downtown McFarland. Plaques of "Then and Now" covering McFarland's 150 years of history were placed at the McFarland High School, the local Culver's restaurant, the E.D. Locke Public Library, and other public locations.

According to the United States Census Bureau, the village has a total area of 3.55 square miles (9.19 km2), all of its land.

There were 3,079 households of which 38.8% had children under the age of 18 living with them, 56.9% were married couples living together, 10.1% had a female householder with no husband present, 4.4% had a male householder with no wife present, and 28.5% were non-families. Of all households, 21.9% were made up of individuals and 7.8% had someone living alone who was 65 years of age or older. The average household size was 2.54 and the average family size was 2.96.

Since 1985 McFarland has held an annual fall Family Festival. The festival has carnival rides, train rides, a parade, and many competitions. The three-day festival takes place at McFarland High School parking lot.

All content from Kiddle encyclopedia articles (including the article images and facts) can be freely used under Attribution-ShareAlike license, unless stated otherwise. Cite this article:
McFarland, Wisconsin Facts for Kids. Kiddle Encyclopedia.