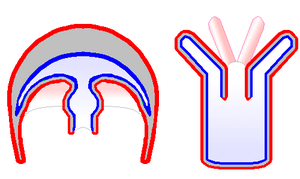 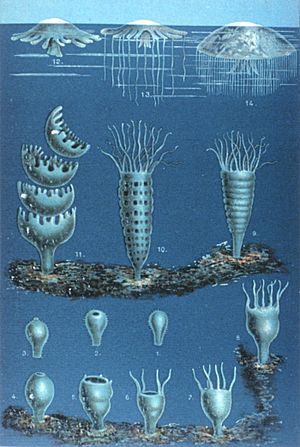 The development of Jellyfish. This image is taken from the book "Das Meer" (The Sea), by Matthias Jacob Schleiden. Top are medusae, or jellyfish; bottom are polyps. In the middle polyps strobilate (divide horizontally) to form medusae

In biology, a medusa (plural: medusae) is a form of cnidarian in which the body is shaped like an umbrella. The other main body-form is the polyp.

Medusae vary from bell-shaped to the shape of a thin disk, scarcely convex above and only slightly concave below. The upper or aboral surface is called the exumbrella and the lower surface is called the subumbrella; the mouth is on the lower surface, which may be partially closed by a membrane extending inward from the margin (called the velum). The digestive cavity consists of the gastrovascular cavity and radiating canals which extend toward the margin; these canals may be simple or branching, and vary in number from few to many. The margin of the disk bears sensory organs and tentacles.

In the class Hydrozoa, medusae are the sexual individuals of many species, alternating in the life cycle with asexual polyps. The medusa form of Hydrozoans are known as hydromedusae. A polyp is the form that attaches to a surface, while a medusa is the form that is free-floating; a species of cnidarian may take each form in a different phase of its life.

The medusa form predominates in the classes Scyphozoa (the common, colourful, large jellyfish) and Cubozoa. Except for freshwater hydrozoans like Craspedacusta sowerbyi, these are the only classes in which medusae appear.

Medusae may have many tentacles with which they catch their prey. Sometimes, people bathing in the ocean are touched by a medusa. Their tentacles are long and thin and covered in venomous stinging cells (known as nematocysts). They inject poison which immobilizes small fish. People who are stung should seek medical attention. There have been some deaths after severe medusa stings.

All content from Kiddle encyclopedia articles (including the article images and facts) can be freely used under Attribution-ShareAlike license, unless stated otherwise. Cite this article:
Medusa (biology) Facts for Kids. Kiddle Encyclopedia.