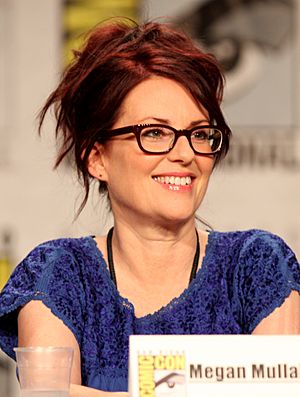 Megan Mullally (born November 12, 1958 in Los Angeles) is an American television performer and stage actress who won two Emmy Awards for her Will & Grace acting. She worked for theater in Chicago and has done many performances in multiple Broadway musicals. She also starred in many television programs besides Will & Grace. She has been married to Nick Offerman since 2003.

All content from Kiddle encyclopedia articles (including the article images and facts) can be freely used under Attribution-ShareAlike license, unless stated otherwise. Cite this article:
Megan Mullally Facts for Kids. Kiddle Encyclopedia.