Melaleuca cuticularis, commonly known as the saltwater paperbark is a tree in the myrtle family, Myrtaceae and is native to the south-west of Western Australia. There is also a disjunct population on Kangaroo Island in South Australia. It is distinguished from other melaleucas by its unusual fruits and very white, papery bark.

The flowers are in groups of three, white or cream in colour, located on the ends of the branches and surrounded by overlapping brown bracts. M. cuticularis flowers between the months of September and January and the fruit which follow are woody capsules appearing star-shaped when viewed end-on. The fruits are generally solitary and 6–11 mm (0.2–0.4 in) long. 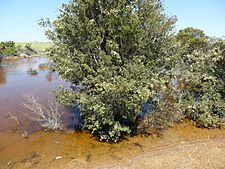 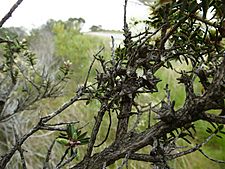 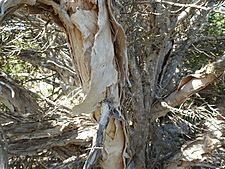 This species was first formally described in 1806 by Jacques Labillardière in Novae Hollandiae Plantarum Specimen from a specimen he collected during the 1791 d'Entrecasteux expedition. The specific epithet (cuticulata) is from the Latin cuticula, meaning "pertaining to the cuticle", referring to the numerous strips of skin-like bark coming away from the trunk and branches.

Melaleuca cuticularis is able to grow in saline wetlands such as swamps and estuaries. It is common in coastal regions south of Perth stretching to Israelite Bay, in the Avon Wheatbelt, Esperance Plains, Jarrah Forest, Swan Coastal Plain and Warren biogeographic regions. It also occurs, although uncommonly, on Kangaroo Island in South Australia.

Melaleuca cuticularis is listed as "not threatened" by the Government of Western Australia Department of Parks and Wildlife.

This species is ideal for sandy clay, loamy clay and clay soils and is commonly used for soil stabilisation and revegetation. It is also shade and drought tolerant so can be used in hedges or windbreaks. It can be used as a specimen plant featuring its attractive bark contrasting with light green foliage.

All content from Kiddle encyclopedia articles (including the article images and facts) can be freely used under Attribution-ShareAlike license, unless stated otherwise. Cite this article:
Melaleuca cuticularis Facts for Kids. Kiddle Encyclopedia.