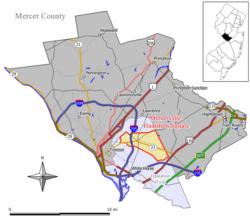 Many historical markers in Mercerville detail the path of the Continental Army under the command of George Washington through the area during the American Revolutionary War. Several are related to their night march from the Second Battle of Trenton to the Battle of Princeton.

Originally called "Sandtown," Mercerville is named after General Hugh Mercer, who died on January 12, 1777 due to wounds incurred at the Battle of Princeton. Hamilton Square was renamed after Alexander Hamilton, during a wave of anti-British sentiment at the time of the War of 1812. It previously had been called Nottingham after the British town.

The main intersection in Mercerville is known as Five Points. It the junction of (starting north and heading clockwise): Quaker Bridge Road (County Route 533), Edinburg Road (CR 535), Nottingham Way (CR 618), White Horse-Mercerville Road (CR 533), and Nottingham Way (CR 535). In addition, New Jersey Route 33 runs east and west to the south of this intersection. Except for Notthingham Way east of Five Points, the preceding roads contain most of Mercervile's commercial businesses.

All content from Kiddle encyclopedia articles (including the article images and facts) can be freely used under Attribution-ShareAlike license, unless stated otherwise. Cite this article:
Mercerville, New Jersey Facts for Kids. Kiddle Encyclopedia.