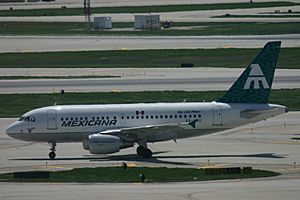 A Mexicana Airbus A318 at O'Hare International Airport.

Mexicana began in 1921 at Tampico. At first, it only carried mail. By the early 1930s, Mexicana was almost entirely owned by Pan American World Airways. In the late 1920s, Mexicana started flying to airports in Costa Rica, Cuba, El Salvador and Guatemala. Mexicana was also the first international airline to begin flights to Los Angeles International Airport.

By the 1960s, Mexicana's main competitor was Aeroméxico. Mexicana almost went into bankruptcy. Mexicana got its first Boeing 727 in 1969. However, two of its Boeing 727s crashed in 1969. The accidents killed some people.

In the 1990s, Aeroméxico and Mexicana formed an agreement. Mexicana started flying the Airbus A320 family in 1991.

Mexicana kept growing. It eventually became one of the largest airlines in North America. In August 2010, Mexicana filed for bankruptcy. The company ended a few weeks later. Mexicana has never flown since then.

All content from Kiddle encyclopedia articles (including the article images and facts) can be freely used under Attribution-ShareAlike license, unless stated otherwise. Cite this article:
Mexicana de Aviacion Facts for Kids. Kiddle Encyclopedia.