Hixon was born on July 16, 1994 in Amherst, Massachusetts to Mandy and David Hixon. He has an older brother, Matthew.

Hixon's parents have both coached in American collegiate sports. His father was the head coach for the men's basketball team at Amherst College. His mother, an All-American diver at Ohio State University, helped foster his interest in diving after he joined her at a diving practice while she was a diving coach at Amherst College. Soon after, she became his personal coach, and he began entering competitions two years later. Growing up, Hixon was also involved in basketball, football, and lacrosse, but after foregoing them in high school, he committed to diving full-time.

He graduated from Amherst Regional High School in 2013. In 2013, he enrolled at the University of Texas in Austin, but in July 2014, he was granted a release by the university, after which he transferred to Indiana University in Bloomington, citing desire for a program that would be a better fit.

Hixon enrolled at the University of Michigan's Ross School of Business in 2020 for his Master of Business Administration (MBA). To train for the 2020 Summer Olympics, he agreed to become a volunteer assistant coach for the Michigan Wolverines swimming and diving team in order to use the pool facilities during the COVID-19 pandemic.

Hixon began diving at the national level when he was 12 and won the 1-meter competition at the national championships three years running. Hixon is a six-time junior U.S. champion, and won two bronze medals, in the 1 meter and 3 meter events, at the 2009 Junior Pan-American Diving Championships in Calgary.

He subsequently paired with Kristian Ipsen to win a silver at the 2010 FINA World Junior Diving Championships in Tucson, Arizona in the 3 meter synchronized springboard event, but only managed a tenth-place finish in the 3 meter solo event.

The event in the first-ever Youth Olympics in Singapore consisted of a 15-man preliminary round and an eight-man final round. After the ten-dive preliminary round, Hixon carried over enough points into the final to begin the final round in third. Although he was sixth after his first dive in the final and fourth heading into his final dive, a poor dive by Italy's Giovanni Tocci allowed Hixon to claim bronze on his final dive, finishing with a score of 554.65 points behind Qiu Bo of China and Oleksandr Bondar of Ukraine.

At the 2011 US National Championships, Hixon captured the senior men 1-meter springboard title at the UCLA's Spieker Aquatics Center in Los Angeles.

Hixon won silver in the 3-meter synchro with Darian Schmidt at the 2013 AT&T National Diving Championships. Hixon qualified for his first senior international competition, the 2013 World Aquatics Championships in Barcelona, with Troy Dumais, and finished fifth in the men's 3-meter synchronized event.

Hixon won the NCAA Division I men's swimming and diving championships titles on both the 1-meter and 3-meter springboard events in 2014.

In the 2015 World Aquatics Championships in Kazan, Hixon won bronze in the men's 1-meter dive. 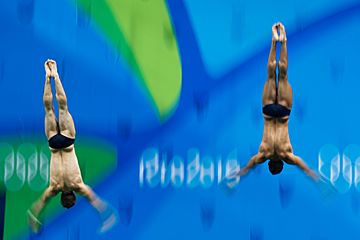 Hixon (left) and Sam Dorman (right) at the 2016 Summer Olympics

Hixon qualified for and represented the United States in both the 3-meter synchronized and men's individual 3-meter springboard events at the 2016 Summer Olympics in Rio. He teamed up with Sam Dorman on the 3-metre synchro only after team changes in March 2016, but won the U.S. trials in their first competition together in June 2016.

In the men's synchronized 3-meter springboard event, Hixon along with his diving partner Sam Dorman placed second and won the silver medal with a score of 450.21, behind Jack Laugher and Chris Mears of Great Britain (454.32) but in front of the Chinese pair Qin Kai and Cao Yuan (443.70).

Hixon and new partner Andrew Capobianco attended the 2019 World Aquatics Championships and placed eighth after the final round of the men's synchronized 3-meter springboard event, totaling 388.08.

Hixon understood that his score at the 2019 World Championships had not been high enough for him and Capobianco to automatically qualify for the Olympics, but he continued training in 2020 in preparation for trials, in spite of the narrowing chances that he would be able to attend the Olympics amid the COVID-19 pandemic when crucial meets had become postponed or cancelled. However, Hixon and Capobianco were unexpectedly chosen to represent the United States at the 2021 FINA Diving World Cup after fellow American pair David Boudia and Steele Johnson abruptly pulled out eight days prior to the start of the competition. For the men's synchronized 3-meter springboard event, Hixon and Capobianco scored a total of 414.18, which landed them in fourth place and ensured their spot at the Olympics.

In June 2021, Hixon and Capobianco placed first in the United States Olympics diving trials for the men's synchronized 3-meter springboard event with a score of 1289.37.

In the men's synchronized 3-meter springboard event, Hixon and Capobianco placed second and won the silver medal with a final score of 444.36, behind Wang Zongyuan and Xie Siyi of China (467.82), but ahead of Patrick Hausding and Lars Rüdiger of Germany (404.73). They stood in fifth place after performing their first two dives, but placed behind leaders Wang and Xie after the next two dives. Their fifth of sixth dives were the best of the round, but their overall score of the six dives ultimately placed them in second.

As of July 2021, Hixon has been in a relationship with Canadian swimmer Kennedy Goss.

All content from Kiddle encyclopedia articles (including the article images and facts) can be freely used under Attribution-ShareAlike license, unless stated otherwise. Cite this article:
Michael Hixon Facts for Kids. Kiddle Encyclopedia.