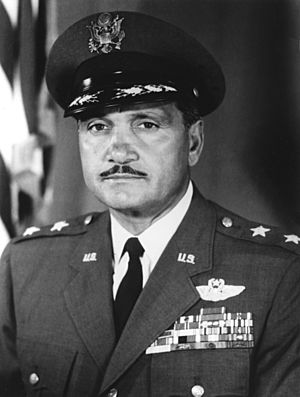 Michael Joseph Ingelido (November 20, 1916 – April 28, 2015) was an American Air Force major general. He was Commander of the Fourteenth Aerospace Force, (Air Defense Command), Ent Air Force Base in Colorado. He joined the Air Force in 1941 less than two weeks before the attack on Pearl Harbor of World War II, and retired in 1972 during the Vietnam War.

Ingelido was born in Meriden, Connecticut. He married his wife Elinor Affinto Ingelido in 1942. They had three sons.

All content from Kiddle encyclopedia articles (including the article images and facts) can be freely used under Attribution-ShareAlike license, unless stated otherwise. Cite this article:
Michael J. Ingelido Facts for Kids. Kiddle Encyclopedia.