Michael Thomas McCaul Sr. (born January 14, 1962) is an American attorney and politician serving as the U.S. representative for TX's 10th congressional district since 2005. A member of the Republican Party, he chaired the House Committee on Homeland Security during the 113th, 114th, and 115th Congresses. His district stretches from Austin to Houston.

McCaul became the ranking member of the House Foreign Affairs Committee in the 116th Congress (2019–2021); he retains that position in the 117th Congress (2021–present).

Born in Dallas, the son of Frances Jane (Lott) and James Addington McCaul, Jr., McCaul has English, Irish, and German ancestry. He graduated from Jesuit College Preparatory School of Dallas and earned a Bachelor of Arts in history from San Antonio's Trinity University in 1984 and a Juris Doctor from St. Mary's University three years later. McCaul also completed a Senior Executive Fellowship at Harvard Kennedy School.

McCaul worked as an attorney and federal prosecutor before entering politics. He was the Chief of Counterterrorism and National Security for Texas's branch of the US Attorney's office, and also worked under the Department of Justice's Public Integrity Section. After he left, McCaul took a position as a Deputy Attorney General in 1999 with the Texas Attorney General's Office and served in this capacity until 2002.

McCaul first ran for the U.S. House of Representatives in 2004 and won a crowded Republican primary in the newly created 10th District. The district, which included part of Austin, the western part of Harris County and several rural counties in between, was thought to be so heavily Republican that no Democratic candidate even filed, effectively handing him the seat.

In 2006 he defeated Democratic nominee Ted Ankrum and former Libertarian presidential candidate Michael Badnarik with 55% of the vote. McCaul was reelected again in 2008, against Democratic candidate Larry Joe Doherty and Libertarian candidate Matt Finkel, 54% to 43%.

He was elected to a ninth term in 2020, defeating Siegel again. 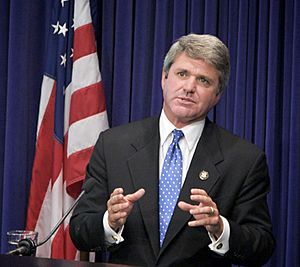 On December 11, 2013, McCaul introduced legislation to require the Secretary of the Department of Homeland Security (DHS) to conduct cybersecurity activities on behalf of the federal government and codify DHS's role in preventing and responding to cybersecurity incidents involving the Information Technology (IT) systems of federal civilian agencies and critical infrastructure in the U.S. McCaul said the bill was "an important step toward addressing the cyber threat."

In April 2019, McCaul spoke out against a resolution that would end U.S. involvement in the Yemeni Civil War, saying it would "disrupt US security cooperation agreements with more than 100 countries." 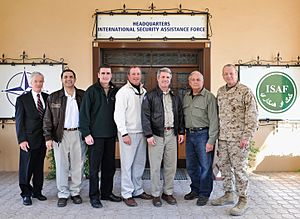 McCaul is married to Linda Mays McCaul, the daughter of Clear Channel Communications founder and former chairman Lowry Mays and sister of its former CEO Mark Mays. In 2011, Roll Call named McCaul as one of the wealthiest members of the United States Congress, surpassing then U.S. Senator John Kerry. His net worth was estimated at $294 million, about 300% higher than it was in the previous year ($74 million). In 2004, the same publication estimated his net worth at $12 million. His wealth increase was due to large monetary transfers from his wife's family.

McCaul and his family live in West Lake Hills, Texas, a wealthy suburb of Austin, Texas. He is frequently named as one of the top ten users of household water in the Austin area, and was the No. 1 consumer of household water in the city in 2017. According to The Dallas Morning News, "Several cities try to conserve water by creating mandatory watering schedules for residents. Dallas residents are allowed to water their lawns twice per week, with the day depending on the digits of their address. In Austin, residents are restricted to one or two days of watering per week and only during certain hours of the day."

On October 28, 2020, it was reported that McCaul's real estate firms have pursued two dozen lawsuits over breaches of lease agreements. Tenants complained about leases being granted under false pretenses, poor conditions in the properties, or hardship events forcing their abandonment, including at least one restaurant closed by law during the coronavirus pandemic. But McCaul's companies aggressively pursued back rent and expenses anyway.

All content from Kiddle encyclopedia articles (including the article images and facts) can be freely used under Attribution-ShareAlike license, unless stated otherwise. Cite this article:
Michael McCaul Facts for Kids. Kiddle Encyclopedia.