Middle Creek is a tributary of Schwaben Creek in Northumberland County, Pennsylvania, in the United States. It is approximately 3.5 miles (5.6 km) long and flows through Washington Township. The watershed of the creek has an area of 3.28 square miles (8.5 km2). The creek is designated as an impaired waterbody, with the cause of the impairment being siltation, low dissolved oxygen levels/organic enrichment, and vegetation removal and the source being agricultural activity. The creek is classified as a Trout Stocked Fishery. 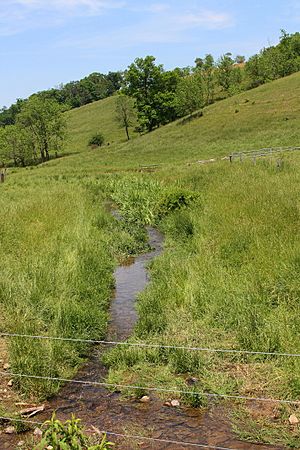 Middle Creek is designated as an impaired waterbody due to siltation, low dissolved oxygen/organic enrichment, and vegetation removal. The source of the impairment is agricultural activity.

The watershed of Middle Creek has an area of 3.28 square miles (8.5 km2). The creek is entirely within the United States Geological Survey quadrangle of Klingerstown. The mouth of the creek is located within 1 mile (1.6 km) of the community of Rebuck.

Middle Creek, like all other streams in the watershed of Schwaben Creek, is designated as a Trout Stocked Fishery.

All content from Kiddle encyclopedia articles (including the article images and facts) can be freely used under Attribution-ShareAlike license, unless stated otherwise. Cite this article:
Middle Creek (Schwaben Creek tributary) Facts for Kids. Kiddle Encyclopedia.