Middle Island is a hamlet and census-designated place (CDP) in the Town of Brookhaven, Suffolk County, New York, United States. The population was 10,483 at the 2010 census. It is situated between the hamlets of Coram and Ridge, to the west and east, respectively, and Rocky Point and Yaphank to the north and south. The name derives from the fact that it lies approximately halfway between the eastern and western ends of Long Island (Montauk Point and the East River) as well as halfway between the northern and southern boundaries (the Long Island Sound and the Atlantic Ocean).

Middle Island has many lakes such as Spring Lake, Artist Lake, and Pine Lake (which has a new dock). Middle Island also contains the headwaters of the Carmans River, which originally began at Pfeiffer's Pond on the northeast corner of NY 25 and Old Middle Island Road, but now begins within Cathedral Pines County Park.

The European-American history of Middle Island goes back at least to 1766, when the first Presbyterian church was built. Rev. David Rose, who was also a doctor and a pastor of the South Haven church, covered his immense parish on horseback. He filled his saddle bags with Bibles and medicines to minister to his frontier congregation. In 1766 the parish opened a cemetery just across from the church.

The first schoolhouse was built in 1813 east of the church. In 1837, a new church was built just to the rear of the older one. It served the community for 200 years until the new Christian Education building was built at the Longwood Estate in 1966.

Middle Island gained an influx of Estonian refugees during the 1940s and 1950s mainly around the Pine Lake area.

For over 100 years (until it was burned down in 1971), Pfeiffer's Store was a center of activity for Middle Island and surrounding communities. A nearby lake, known as Corwin's Pond, was renamed "Artist Lake" after painter Alonzo Chappel settled there in 1869. 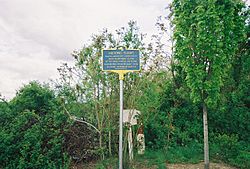 Plaque on NY 25 at Artist Lake commemorating the spot where Ralph Johnstone's plane landed after setting altitude record of 8,471 feet (2,582 m) on October 27, 1910

Middle Island is served by the Longwood Central School District, which at 58 square miles (150 km2) is the largest school district on Long Island. The Longwood Public Library is located in Middle Island.

All content from Kiddle encyclopedia articles (including the article images and facts) can be freely used under Attribution-ShareAlike license, unless stated otherwise. Cite this article:
Middle Island, New York Facts for Kids. Kiddle Encyclopedia.