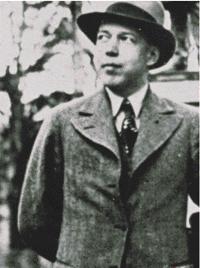 Mika Toimi Waltari (19 September 1908 – 26 August 1979) was a Finnish writer. He is best known for his best-selling novel The Egyptian (Finnish: Sinuhe egyptiläinen). His career lasted over 40 years. He wrote at least 29 novels, 15 novellas, 6 collections of stories or fairy tales, 6 collections of poetry and 26 plays. Waltari wrote screenplays, radio plays, non-fiction, translations, and hundreds of reviews and articles. He is also internationally the best-known Finnish writer. His works have been translated into more than 30 languages.

Waltari graduated from the University of Helsinki. He first studied theology, then history and languages. His career as writer started with religious poems and horror short stories. His first novel Suuri illusioni ('The Great Illusion') was his fifth work and a big success. It has been compared to the famous works of the 1920s by Ernest Hemingway and F. Scott Fitzgerald.

Waltari's chief work, which made him internationally famous, was published after World War II. This was the large novel Sinuhe Egyptilainen (UK title: Sinuhe the Egyptian; US title: The Egyptian). The story is placed in ancient Egypt. Waltari knew a lot about life there. Between the lines one can read a story about Christianity and history. The book contains comparison of idealism and realism but it does not tell which of them wins. It became popular also as a Hollywood movie. In later life he worked as a member of the Academy of Finland. He never finished his last novel on the Knights of Malta due to illness. First awarded in 1979, the Mika Waltari Award is named in his honor.

All content from Kiddle encyclopedia articles (including the article images and facts) can be freely used under Attribution-ShareAlike license, unless stated otherwise. Cite this article:
Mika Waltari Facts for Kids. Kiddle Encyclopedia.