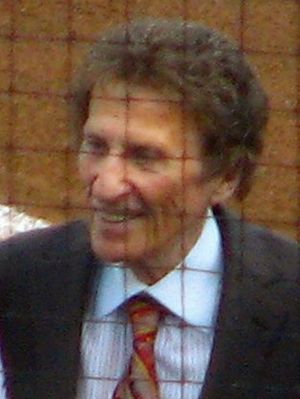 Michael "Mike" Ilitch Sr. (July 20, 1929 – February 10, 2017) was an American entrepreneur. He was the founder and owner of the international fast food franchise Little Caesars. He also owned the sports teams Detroit Red Wings of the National Hockey League and Detroit Tigers of the Major League Baseball.

From 1994 until her death in 2005, Ilitch paid Rosa Parks' rent to help her live in a safer part of Detroit.

Ilitch was born in Detroit, Michigan. His parents were Macedonian. He was married to Marian Ilitch from 1955 until his death. They had seven children.

All content from Kiddle encyclopedia articles (including the article images and facts) can be freely used under Attribution-ShareAlike license, unless stated otherwise. Cite this article:
Mike Ilitch Facts for Kids. Kiddle Encyclopedia.