Milford Sound Airport (IATA: MFN, ICAO: NZMF) is a small but very busy (in terms of flight movements) airport in Milford Sound, in New Zealand's Fiordland region of the South Island. It is mainly used by tourist / flightseeing operators.

On 17 November 1938, a Southland Airways Puss Moth piloted by Arthur Bradshaw made the first landing in at Milford Sound. However, any further development for air operations into the Fiord was delayed by World War II. Post war pilot Fred 'Popeye' Lucas was the next to land an aircraft in Milford. He landed on the sand spit in his Southern Scenic Airtrips Auster on 22 August 1951. This then sparked the addition of an airstrip for use by his company to expand tourism into Milford Sound. An airstrip was constructed, initially 550 yards (503 metres) in length with the first official landing achieved in May 1952.

Over the years the airstrip has been upgraded and lengthened till today's sealed strip of 792 metres. In order for Southern Scenic Airtrips and National Airways Corporation (NAC) to be able to fly the larger twin-engine aircraft into the area the airstrip became officially licensed in 1956.

Prior to the ability of air operations, Milford Sound had no access in the winter months as the roads became impassable. With the addition of the airstrip, it was recorded that by 1964 more than 400 tourists were taking the 'Gateway to Magnificence Experience' flight to Milford Sound each month at peak holiday time. 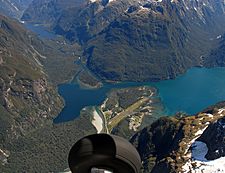 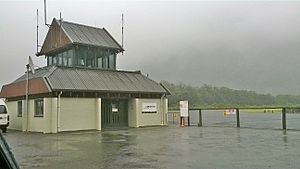 The small terminal at Milford Sound

All content from Kiddle encyclopedia articles (including the article images and facts) can be freely used under Attribution-ShareAlike license, unless stated otherwise. Cite this article:
Milford Sound Airport Facts for Kids. Kiddle Encyclopedia.