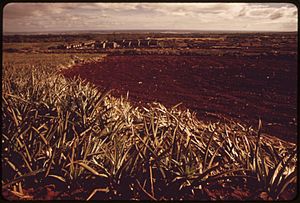 Mililani is a city located near the center of the island of Oʻahu in Honolulu County, Hawaii, United States. It consists of two census-designated places, Mililani Town, with a population of 27,629 at the 2010 census, and Mililani Mauka, with a 2010 census population of 21,039.

Mililani sits on former plantation fields owned by Castle & Cooke, which began planning for its development in the early 1960s under its Oceanic Properties subsidiary. Castle & Cooke's plan was to make Mililani Town a satellite city by using a prestigious group of planners and architects to satisfy Oahu's great pent-up demand for housing with a sensitively designed, affordable new community of a type unique in Hawaii. Architect and developer Al Boeke, who would later create the planned community of Sea Ranch, California, was the development director of Mililani. The first homes in Mililani went on sale on June 3, 1968.

In 1976, the Interstate H-2 opened, cutting travel time from Mililani to Honolulu in half. In 1986, Mililani was named an All-America City. It is the only community in Hawaii ever to receive this distinction. Mililani is the third wealthiest zip code (96789) in the state of Hawaii, according to the 2006 ranking by Pacific Business News.

Although it is largely a bedroom community for Honolulu, Mililani has its own commercial shopping centers, schools (such as Mililani High School), parks, community centers, and a golf course, and resembles a modern American suburban town. Mililani homeowners must pay dues to the Mililani Town Association, which enforces covenants and design standards, and provides recreational facilities including several pools.

The Mililani Golf Club is a par-72, 6,455-yard course that is open to the public. The Mililani Technology Park is a nearby campus-like park that is zoned for high-tech industries.

On April 6, 1990, ground was broken for Mililani Mauka, a newer and more upscale community east of the Interstate H-2. The first homeowners moved into Mauka in 1992.

In 2003 Mililani was designated as the pilot site for the City and County of Honolulu's curbside recycling program. In 2005, Money magazine named Mililani as one of the best places to live in the U.S. In 2006, Mililani Ike Elementary School first grade teacher Phyllis Nakama-Kawamoto was named Hawaii's American Star of Teaching by the U.S. Department of Education.[1]

Travelling north on either Kamehameha Highway (State Rte. 99) or Interstate H-2 connects the traveller with Wahiawā. Travelling south on either of these arteries connects to Waipiʻo.

There were 9,010 households out of which 43.1% had children under the age of 18 living with them, 70.4% were married couples living together, 10.2% had a female householder with no husband present, and 14.6% were non-families. 10.6% of all households were made up of individuals and 2.0% had someone living alone who was 65 years of age or older. The average household size was 3.17 and the average family size was 3.41.

All content from Kiddle encyclopedia articles (including the article images and facts) can be freely used under Attribution-ShareAlike license, unless stated otherwise. Cite this article:
Mililani, Hawaii Facts for Kids. Kiddle Encyclopedia.