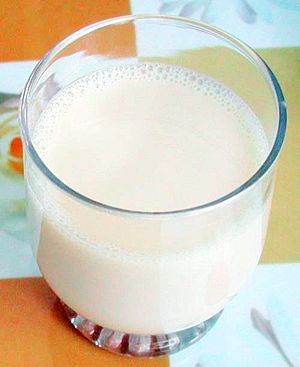 A glass of soy-rice drink

A Milk substitute is a product that resembles milk. Milk substitutes have a similar look and taste to milk produced by the mammary glands of a mammal. In milk substitutes many of the ingredients of milk are replaced: A milk substitute may contain fat and proteins obtained from plants. People with a lactose intolerance or a milk allergy often replace milk by a substitute.

Substitution products for milk were created due to consumer demand. Customers worldwide wished for healthier beverages tasting and looking like milk, and a way of obtaining the same nutrients as in cow milk, but without the often present antibiotics, growth hormones, and painkillers caused by modern factory farming. Also very important is the fact that such substitutes allow vegans, and people who are seriously ill (gout, PKU, rheumatoid arthritis etc. require the avoidance of foods with high protein content because of the purine levels, among other factors), lactose intolerant, or allergic to dairy protein, to enjoy all commonly cow milk based foods without health problems or ethical concerns. 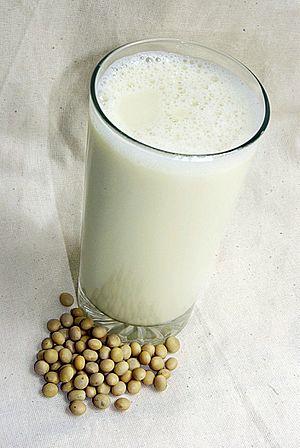 Soy milk is possibly one of the most popular non-dairy milk products on the shelf. It is made from soybeans and it contains about the same amount of protein as dairy milk. It is claimed by some to contain twice as much sugar and saturated fats . When enriched by the manufacturer, it may be a source of calcium and vitamin D and some B vitamins such as B12; however, this is not in all brands of soy milk. According to research, soy protein is possible a valuable substitution for animal protein to prevent and control the Chronic Kidney Disease. 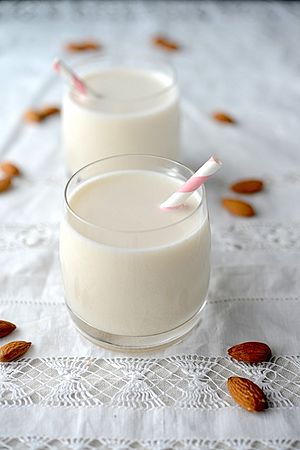 Almond milk is produced from almonds by grinding almonds with water, then straining the pulp from the liquid. This procedure can be done at home. Almond milk does not contain high amounts of saturated fat or calories.

Rice milk is mostly used for baking because of its sweet taste, but in case of a nut or soy allergy a grain milk processed from rice may be preferable. When fortified, this milk can be a source of calcium, vitamin B12, and vitamin D2.

Hemp milk is made by grinding hemp seeds with water, which are then strained to yield a nutty creamy flavored milk. Hemp milk is naturally rich in protein and amino acids.

Coconut milk is made by mixing water with the freshly grated white inside pulp of a ripe coconut. It is also a source of calcium and vitamins C, E, B1, B3, B5 and B6. Coconut milk is usually very high in fat and calories, but low in protein, which makes it a good substitute for cream, as it can be whipped up in a similar fashion to decorate baked goods or desserts.

In yeast-derived milk products, sugar is mixed with yeast and the resulting fermentation process creates the whey and casein proteins (which are identical to those found in milk). This is then combined with plant-based sugars, fats, and minerals to reproduce the milk, which can then be used like regular milk, including cheesemaking. Milk substitutes, produced in this way do not require the use of animals and (compared to regular milk production), it is thus more efficient, produces fewer greenhouse gases and utilizes less land (as no animals need to be fed, medicated, impregnated, milked, and slaughtered when no longer productive). 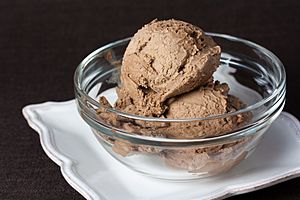 Lactose is the major sugar found in milk. Lactose intolerance occurs when an individual is deficient in the enzyme lactase, which breaks down the lactose in the intestine. Bloating, cramps, constipation, or diarrhea may result when an individual who is lactose intolerant consumes a dairy product. A variety of products are available which contain milk substitutes, so those foods are still able to be consumed by individuals with a lactose intolerance. Food products which have been manufactured with milk substitutes include milk, yogurt, whipped topping and ice cream.

However many smaller scale, organic, gourmet or slow food focused non-dairy ice cream manufacturers create all their products using traditional, natural and only slightly altered methods. The preferred base for non dairy ice creams are often coconut milk or plant cream, due to the higher fat and lower water content preventing the formation of ice crystals.

Breast milk substitutes are available for infants if breast feeding is not an option. Infant formulas made of cow’s milk can be a supplement to breast milk or as sole source of nutrition before solid food is introduced. It is vital that the formula is fortified with dietary nutrients optimised for babies and toddlers, such as iron, to ensure survival, growth and health of the baby. Those wishing to avoid animal products can use soy-based or rice-based infant formula.

All content from Kiddle encyclopedia articles (including the article images and facts) can be freely used under Attribution-ShareAlike license, unless stated otherwise. Cite this article:
Milk substitute Facts for Kids. Kiddle Encyclopedia.