Millersburg is a borough in Dauphin County, Pennsylvania, United States. The population was 2,557 at the 2010 census. It is part of the Harrisburg–Carlisle Metropolitan Statistical Area.

Millersburg is the southwestern terminus of U.S. Route 209, which leads northeast 44 miles (71 km) to Pottsville and 211 miles (340 km) to its northeastern terminus north of Kingston, New York. Pennsylvania Route 147 passes through the center of Millersburg as Market Street, leading north (upriver) 29 miles (47 km) to Sunbury and south (downriver) 13 miles (21 km) to U.S. Route 22 near Duncannon. The Millersburg Ferry leads west across the Susquehanna to Buffalo Township in Perry County, allowing a connection to U.S. Routes 11 and 15.

Millersburg was founded in 1807 by Daniel Miller, for whom the town was named.

The Millersburg Ferry and Millersburg Passenger Rail Station are listed on the National Register of Historic Places.

During the spring of 1790, Daniel Miller and his brother, John were traveling north along the Susquehanna River. When they arrived at the north side of Berry's Mountain, tradition has it, Daniel was so taken with the beauty of the area where the Wiconisco Creek joined with the Susquehanna that he resolved to purchase the land at that location. On June 2, 1790, Miller received a deed for 979-1/4 acres at the mouth of the Wiconisco Creek from William Von Phul of Philadelphia, the owner of the land upon which Millersburg is now situated.

In 1794, Miller built his first cabin that later served as a school in which he taught the children of the surrounding area without compensation. The building was on the site of the old Johnson-Baillie Shoe Company factory on Pine near Market Street. It was not until 1805, upon completion of a more suitable dwelling which still stands on the northeast corner of Pine and Walnut streets that Miller brought his wife, Elizabeth, and their two children to their new home. In 1807, Miller's dream of a town on the banks of the Susquehanna became a reality. During that year, he had the land surveyed and laid out into lots, reserving land for churches, the town square and a riverside park. Until a church could be built, Miller, who was a lay minister of the Methodist Church, held services in his own home.

Transportation in Millersburg has always been a very important commodity to the community. Two major transportation projects were planned for Millersburg in the 19th century: one was the Lykens Valley R.R. & Coal Company, and the other was the extension of the Pennsylvania Canal, both proposed in the 1830s. The state began construction of the Wiconisco Canal as part of the Eastern Division of the Pennsylvania Canal in 1837. Millersburg was the northern terminus of the Dauphin County Canal network. 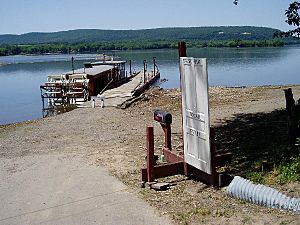 The Millersburg Ferry, the last surviving ferry which crosses the Susquehanna River, and the last wooden-stern paddle-wheel ferry operating within the United States, operates out of Millersburg, which sits on the east side of the river. According to a sign posted at the ferry dock, a ferry has operated here since 1825. The original ferries were poled across the river. Paddle-wheel boats went into operation in 1873. The current ferries are wooden-stern paddle-wheelers which can carry up to four automobiles. The one-mile crossing goes to a point on the west side of the Susquehanna, in a campground near the point where Pennsylvania Route 34 meets U.S. Route 11 and U.S. Route 15, and near Liverpool. The ferry boats were officially listed on the National Register of Historic Places in 2006.

The river at this location is very wide (approximately 1 mile) but is typically very shallow, sometimes only 2 feet (0.61 m) deep. The ferry follows a course across the river near a submerged man-made wall composed of river rocks and debris which provides slightly deeper clearance and prevents the ferry from grounding out.

Millersburg is the home of the Ned Smith Center for Nature and Art which was opened on October 9, 2004.

All content from Kiddle encyclopedia articles (including the article images and facts) can be freely used under Attribution-ShareAlike license, unless stated otherwise. Cite this article:
Millersburg, Pennsylvania Facts for Kids. Kiddle Encyclopedia.