Millport (Scottish Gaelic: Port a' Mhuilinn) is the only town on the island of Great Cumbrae in the Firth of Clyde off the coast of North Ayrshire. The town is 4 miles (6 kilometres) south from the Caledonian MacBrayne ferry slipway.

Tourism is an important aspect of the economy. Due to its small size, the island and its town are often linked in the minds of visitors and residents and Great Cumbrae is often referred to as Millport. The island offers spectacular views across to The Isle of Arran as well as of its smaller neighbour which lies barely a kilometre away, called Little Cumbrae. The Cumbraes are referred to as the Kumreyiar in the Norse Saga of Haakon Haakonarson.

Millport has the smallest extant cathedral in the British Isles.

The Gaelic name Cumaradh means "place of the Cymric people", referring to the Brittonic-speaking inhabitants of the Kingdom of Strathclyde. Alternatively, the name Cumbrae may derive from Kil Maura meaning "cell or church of a female saint".

The Garrison House in the centre of town, constructed in 1745, was formerly the barracks/Captain's mansion, then the home of the Earl of Glasgow, and is now in community ownership (see "Current Developments" below).

During the development of the River Clyde as a main thoroughfare for goods, shipbuilding and smuggling, Millport was a strategic base for Customs and Excise. Several of the streets in Millport are named after crew members of the Revenue cutter Royal George.

The Victorian era was a period of rapid growth, both in terms of population, governance, amenities and property. To the west and east of the old harbour, many fine Victorian and Edwardian villas were built, along with new tenements. These still form the backbone of the housing stock. 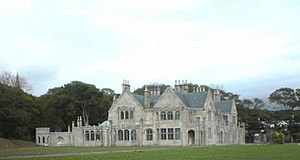 The Garrison House was badly damaged after an arson attack in 2001. Cumbrae Community Development Company, the local development trust, made a successful bid to the National Lottery and other funders to enable the building to be re-constructed for community benefit. After several years of work renovation of the property was completed in 2008 at a total cost of £5 million. It now houses the Museum of the Cumbraes, a library, council offices, a GP surgery and the Garrison Cafe. The Garrison Model Rail Club, located in cabins on the grounds at Garrison House, welcomes visits to its model railway layouts each week.

Currently a large development of around 40 family sized homes is underway between the Millport Bowling Club and Penmachrie Farm. It is notable that the houses are being built primarily by private individuals - with the land having been sold off in the form of single plots. 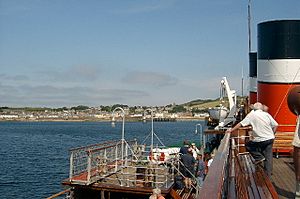 Millport, along with Rothesay on the Isle of Bute, is famous with generations of daytrippers from Glasgow as one of the resorts visited going "doon the watter" (down the water), meaning taking a trip aboard a River Clyde paddle steamer. At one time it was common for visitors to stay for several weeks over the summer, however nowadays the primary tourist trade comes in the form of daytrippers. This is mostly due to the growth of package holidays to Spain and the Balearics in the 1960s. It is still possible to experience a traditional day out courtesy of PS Waverley which calls at Millport twice a week during the summer, once originating at Ayr and once at Glasgow.

One of the best known landmarks in Millport is the Crocodile Rock on the foreshore. It has been a feature since at least 1913, as it was that year that Robert Brown was acknowledged by the council for the work.

The town hosts the annual Millport Country and Western Festival during the first week in September, and a fireworks display is held during September Weekend. Millport has the world's narrowest house, The Wedge which at its front, measures just 47 inches or 1.19 metres. The house is 22 feet long by 11 feet wide at its widest point.

Millport Bay contains a number of free-to-use visitor moorings, and is a popular destination for sailors in the summer. There is a small boat yard at the western end of the town. There are wide sandy beaches close to the centre of town for paddling and swimming. A live webcam of Kames Bay can be seen here.

Millport has an 18-hole golf course, with spectacular views over the Arran hills and the Firth of Clyde. Other recreational facilities include a crazy golf course and two football pitches, one at either end of the town and a children's play area near the boat yard. For fishing, there are two fresh water reservoirs beside the golf course where fly fishing is available and excellent sea fishing, primarily for mackerel, is available. The best place for this is from the rocks at Farland Point, just inside the town limits. Many people take advantage of the level perimeter road around the island to walk and cycle the circuit of just over 10 miles.

View of Millport and Little Cumbrae. Isle of Arran in the background

In spite of its relatively remote feel, Millport is only one hour's travel from major transport hubs. Millport is easily accessible by public transport via the train at Largs, with a ferry journey of only seven minutes. A convenient bus meets each ferry giving the town excellent connections.

All content from Kiddle encyclopedia articles (including the article images and facts) can be freely used under Attribution-ShareAlike license, unless stated otherwise. Cite this article:
Millport, Cumbrae Facts for Kids. Kiddle Encyclopedia.