Missouri Buttes are located in Crook County in northeast Wyoming on the northwest flank of the Black Hills Uplift. The buttes are 3.5 miles (5.6 km) northwest (N60°W) of Devils Tower between the Little Missouri and the Belle Fourche rivers. 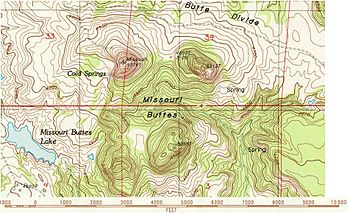 As with Devils Tower, the buttes are composed of igneous intrusive phonolite which exhibits columnar jointing. The rocks of the buttes have been interpreted to be part of a laccolith, a magmatic stock or volcano conduits that became exposed at the surface after overlying rocks eroded away. 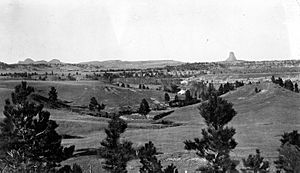 All content from Kiddle encyclopedia articles (including the article images and facts) can be freely used under Attribution-ShareAlike license, unless stated otherwise. Cite this article:
Missouri Buttes Facts for Kids. Kiddle Encyclopedia.