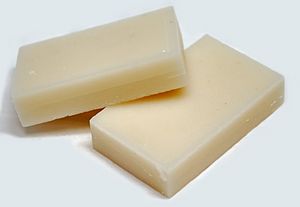 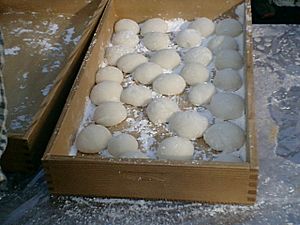 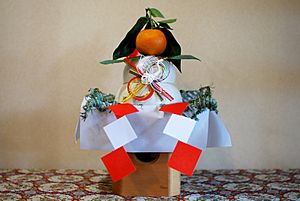 Kagami mochi, a variation of mochi which is placed on family altars on December 28 to celebrate Japanese New Year

Mochi (Japanese: 餅, もち) is Japanese rice cake made of mochigome, a short-grain japonica glutinous rice. The rice is pounded into paste and molded into the desired shape. In Japan it is traditionally made in a ceremony called mochitsuki. While also eaten year-round, mochi is a traditional food for the Japanese New Year and is commonly sold and eaten during that time.

Mochi is a multicomponent food consisting of polysaccharides, lipids, protein and water. Mochi has a heterogeneous structure of amylopectin gel, starch grains, and air bubbles. This rice is characterized by its low level of amylose starch, and is derived from short- or medium-grain japonica rices. The protein concentration of the rice is higher than that of normal short-grain rice, and the two also differ in amylose content. In mochi rice, the amylose content is negligible, and the amylopectin level is high, which results in its gel-like consistency.

The exact origin of mochi has yet to be confirmed. The first mochitsuki ceremony occurred after the Kami are said to have descended to Earth, which was following the birth of rice cultivation in Yamato during the Yayoi period (300 BC-300 AD). Red rice was the original variation used in the production of mochi. At this time, it was eaten exclusively by the emperor and nobles due to its status as an omen of good fortune. During the Japanese Heian period (794-1192), mochi was used as a "food for the gods" and in religious offerings in Shinto rituals performed by aristocrats. In addition to general good fortune, mochi was also known as a talisman for happy marriages.

The first recorded accounts of mochi being used as a part of New Year’s festivities are from the Japanese Heian period. The nobles of the imperial court believed that long strands of freshly made mochi symbolized long life and well-being, while dried mochi helped strengthen one’s teeth. Accounts of it can also be found in the oldest Japanese novel, The Tale of Genji.

Mochi continues to be one of the traditional foods eaten around Japanese New Year, as it is sold and consumed in abundance around this time. A special type, called kagami mochi (mirror mochi), is placed on family altars on December 28 each year. Kagami mochi is composed of two spheres of mochi stacked on top of one another, topped with an orange (daidai). On this occasion, which was originally practiced by the samurai, the round rice cakes of kagami mochi would be broken, thus symbolizing the mirror’s opening and the ending of the New Year’s celebrations. 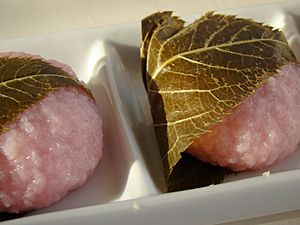 The cherry blossom (sakura), is a symbol of Japan and signifies the onset of full-fledged spring. Sakuramochi is a pink-coloured mochi surrounding sweet anko and wrapped in an edible, salted cherry leaf; this dish is usually made during the spring.

Children's Day is celebrated in Japan on May 5. On this day, the Japanese promote the happiness and well-being of children. Kashiwa-mochi and chimaki are made especially for this celebration. Kashiwa-mochi is white mochi surrounding a sweet anko filling with a Kashiwa oak leaf wrapped around it. Chimaki is a variation of a dango wrapped in bamboo leaves. 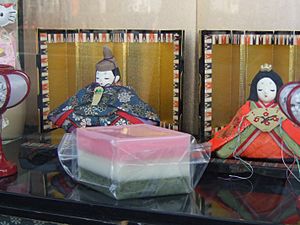 Hishi mochi is a ceremonial dessert presented as a ritual offering on the days leading up to Hinamatsuri or "Girls' Day" in Japan. Hishi mochi] is rhomboid-shaped mochi with layers of red, green, and white. The three layers are coloured with jasmine flowers, water caltrop, and mugwort. 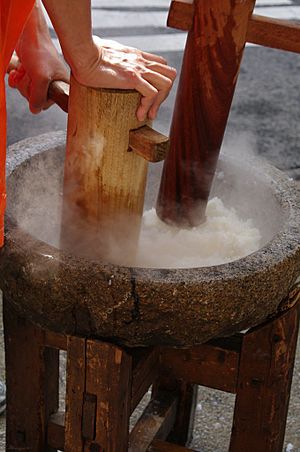 Traditionally, mochi was made from whole rice, in a labor-intensive process. The traditional mochi-pounding ceremony in Japan is mochitsuki:

Mochi is prepared from a flour of sweet rice (mochiko). The flour is mixed with water and cooked on a stovetop or in the microwave until it forms a sticky, opaque, white mass. This process is performed twice, and the mass is stirred in between until it becomes malleable and slightly transparent.

With modern equipment, mochi can be made at home, with the technology automating the laborious dough pounding. Household mochi appliances provide a suitable space where the environment of the dough can be controlled.

The assembly-line sections in mochi production control these aspects: 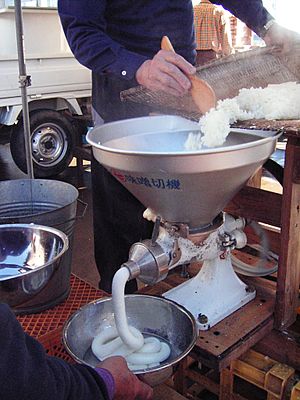 Making mochi with some modern equipment

Varieties of glutinous and waxy rice are produced as major raw material for mochi. The rice is chosen for tensile strength and compressibility. One study found that in Kantomochi rice 172 and BC3, amylopectin distribution varied and affected the hardness of mochi. Kantomochi rice produced harder, brittle, grainy textures, all undesirable qualities except for ease of cutting. For mass production, the rice variety should be chewy, but easy to separate.

Generally, two types of machines are used for mochi production in an assembly line. One machine prepares the dough, while the other forms the dough into consistent shapes, unfilled or with filling. The first type of machine controls the temperature at which the rice gelatinizes. One study found that a temperature of 62°C corresponds to the gelatinization of mochi. When the temperature fell below 62°C, the hardening was too slow. It was concluded that a processing temperature below 62 °C was unsuitable for dough preparation.

Mochi is a variation of a low-calorie, low-fat rice cake. The cake has two essential raw materials, rice and water. Sticky rice (also called sweet rice, Oryza sativa var. glutinosa, glutinous sticky rice, glutinous rice, waxy rice, botan rice, biroin chal, mochi rice, pearl rice, and pulut), whether brown or white, is best for mochi-making, as long-grain varieties will not expand perfectly. Water is essential in the early stages of preparation. Other additives such as salt and other seasonings and flavourings are important in terms of nutritive value and taste. However, additives can cause breakage of the mass, so should not be added to the rice before the cake is formed. The cake must be steamed (rather than boiled) until it gains a smooth and elastic texture. The balls of rice are then flattened, cut into pieces, or shaped into rounds. The machines for mass production are a hugely expensive investment, and the product should have the proper moisture, to appeal to consumers.

The manufacturing process of mochi is:

The best preservation for mochi is refrigeration for a short storage period. For preserving larger batches over an extended time, freezing is recommended. The best method for freezing involves wrapping each mochi cake tightly in a sealed plastic bag. Although mochi can be kept in a freezer for almost one year, the frozen mochi may lose flavor and softness or get freezer-burned.

All content from Kiddle encyclopedia articles (including the article images and facts) can be freely used under Attribution-ShareAlike license, unless stated otherwise. Cite this article:
Mochi (food) Facts for Kids. Kiddle Encyclopedia.