Monica Puig Marchán (born September 27, 1993) is a Puerto Rican professional tennis player. She is the first Puerto Rican in history to win an gold medal at the Olympics while representing Puerto Rico, having done so in 2016 at the women's singles event. She is also a Central American and Caribbean champion and Pan American silver medalist.

Having turned professional in 2010, Puig has won two WTA singles titles and six ITF singles titles. On 26 September 2016, she reached her career-high singles ranking of world No. 27. On 25 May 2015, she peaked at No. 210 in the doubles rankings.

At the 2016 Rio Olympics, Puig won the gold medal, the ninth overall medal at the Games for Puerto Rico. With the feat, she also became the first Latin American champion in the women's singles discipline and is the only unseeded female player to win the gold medal since the reintroduction of tennis in 1988. During her career, Puig has defeated top-ten players Sara Errani, Caroline Garcia, Angelique Kerber, Garbiñe Muguruza, Aryna Sabalenka, and Caroline Wozniacki.

In 2007, she entered her first tournament at the Prince Cup, but withdrew from the qualifying draw.

In 2008, she started the season with a surprise run to the final of the Costa Rica Bowl (Grade 3) as a qualifier losing in straight sets to Eugenie Bouchard. She continued her good form, winning two out of three tournaments. Puig continued good results in small Grade-3 and-4 tournaments. In her first Grade-1 tournament in Lexington, she defeated Charlotte Calhoun before going out to Lauren Embree. She continued to participate in bigger tournaments, though not with as much success as she had in the smaller ones.

Puig had her breakthrough season in 2009; she started doing much better in the bigger tournaments. She reached her first Grade-1 final in Casablanca, losing to Mai Grage of Denmark. She continued playing consistently, highlights of the latter months of the year included a semifinal appearance at a Grade-B1 tournament in Tulsa, losing to Bouchard in three sets. In her next tournament, she won the doubles title.

In 2010, she continued her success at a higher level. Puig started the year reaching the final of the 32nd International Casablanca Junior Cup (Grade A), falling easily to Sachie Ishizu of Japan. She then reached another final a week later at the Coffee Bowl (Grade 1) losing to An-Sophie Mestach of Belgium in straights. Puig followed that up with a semifinal appearance at a Grade-1 tournament in Barranquilla. Consistent results followed, before a huge Grade-A title at the 27th Copa Gerdau, defeating Jessica Pegula in the final. After a semifinal appearance at another Grade-A calibre tournament, she fell in the quarterfinals of the French Open. After that, she failed to advance past the quarterfinals of any of her tournaments until the US Open, where she lost to Yulia Putintseva. Puig finished the season with a flourish, falling in the quarterfinals of Osaka (Grade A), the final of Mérida (Grade 1) and the semis of Key Biscayne (Grade A), both to Lauren Davis.

In July, Puig won the gold medal in women's singles at the Central American and Caribbean Games. At the Youth Olympics in Singapore, she was the second seed in the singles event but lost in the first round to Zheng Saisai of China, in straight sets.

In January, Puig won the Loy Yang Traralgon International defeating Yulia Putintseva of Russia. Puig was also in the juniors event of the Australian Open. She qualified for the final but lost to Belgian An-Sophie Mestach. On February 20, Puig won the singles title in Surprise, Arizona defeating Lenka Wienerová, in straight sets.

Puig received a wildcard into the qualifying draw of the Indian Wells Open. She defeated Anne Keothavong in the first round but was then knocked out by Sorana Cîrstea, in three sets.

In the juniors event of the French Open, she also qualified for the final but lost to Tunisian Ons Jabeur.

In the following month, Puig played on the qualifying draw of two WTA Tour events, in Bogotá and Monterrey, without being able to get past the first round of the main draw. She received a wildcard to play in the Indian Wells Masters qualifying draw, but, in the second round, lost to world No. 66, Eleni Daniilidou. Her breakthrough came when she reached the final of the Poza Rica $25k tournament unseeded. The last two matches prior to the final included wins against tournament seeds No. 4 and 1, although she lost to second seed Yaroslava Shvedova.

The second breakthrough of 2012 occurred when she won the first $50k tournament of her career at Joué-lès-Tours, France. Puig opened the first round by eliminating the top-seed and world ranked 87, Alexandra Panova. In the semifinals, she defeated An-Sophie Mestach, the same opponent to whom she lost in the 2011 Australian Open junior final. 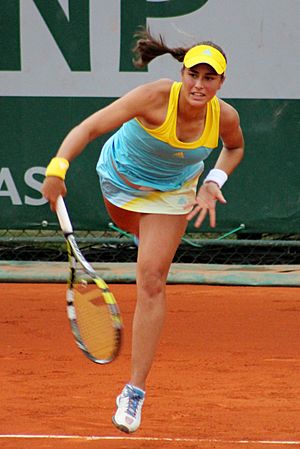 Puig began her season at the Brisbane International. After coming through qualifying, she reached the second round where she lost to fourth seed Angelique Kerber. At the Australian Open, Puig was defeated in the first round of qualifying by Wang Qiang.

In Paris at the WTA indoor event, Puig lost in the final round of qualifying to Stefanie Vögele. Seeded eighth at the $100k ITF Midland, Puig reached the semifinal where she was defeated by top seed and eventual champion, Lauren Davis.

In May, she played and won her first WTA final in Strasbourg, defeating Sílvia Soler Espinosa. This success took her to her highest WTA ranking 41st.

In October 2014, Puig won first place at the WTA Rising Stars Invitational in Singapore. Puig defeated Zheng Saisai in two sets. At the end of the year, she was world No. 59.

In this same year, she also won the gold medal at the Central American and Caribbean Games in Veracruz, Mexico representing Puerto Rico.

Puig started the season strongly in Sydney. As a qualifier, she went on to defeat Magdaléna Rybáriková, Anna Karolína Schmiedlová, Samantha Stosur, and Belinda Bencic before losing in her second WTA final to Svetlana Kuznetsova.

At the Australian Open, she reached the third round, defeating Magda Linette and Kristýna Plíšková before losing to the fourth seed Agnieszka Radwańska. She repeated her Australian Open success to reach the third round at the French Open, defeating Olga Govortsova and Julia Görges, before losing to the 15th seed Madison Keys. In the Eastbourne International, Puig progressed as far as to the semifinals after beating Kristina Mladenovic. She progressed on Wimbledon and faced home player Johanna Konta in the first round, in which Puig lost in two sets.

At the Rio Summer Olympics, Puig won the women's singles gold medal by defeating Polona Hercog, Anastasia Pavlyuchenkova, Garbiñe Muguruza, Laura Siegemund, Petra Kvitová, and finally Angelique Kerber. Puig became the second unseeded player to win a medal at the Olympics after Alicia Molik had won bronze in Athens and the first athlete representing Puerto Rico to win a gold medal in any sport. In Puerto Rico's Olympic history, Puig is the ninth sportsperson and the first woman to win an Olympic medal. She is the first Latin American representative to win the gold medal in singles and the second to win a medal, after Gabriela Sabatini won silver at the 1988 Summer Olympics. In November, Puig was presented the award for Best Female Athlete in Rio 2016 presented by the Association of National Olympic Committees (ANOC).

She was not originally seeded at the US Open, but after a withdrawal Sloane Stephens, Puig became the 32nd seed. She lost in the first round to Zheng Saisai, and also in doubles with Mariana Duque-Mariño to Nicole Gibbs and Nao Hibino, and concluded the season with a career best year-end ranking of 32.

Puig was unable to replicate her success throughout 2017 and fell out of the top 50 in June. By losing in three sets to Mirjana Lučić-Baroni in the first round of the US Open, she concluded her 2017 season without advancing past the second round of any Grand Slam or Premier Mandatory tournament. However, she did end the season on a high note by reaching her fourth career WTA Tour final at the Luxembourg Open. 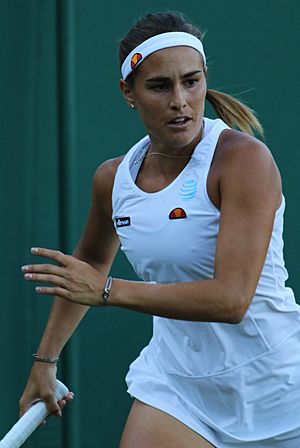 In February, Puig competed at the Mexican Open and was defeated in the second round by qualifier Rebecca Peterson. At the Indian Wells Open, she lost in round two to twenty-first seed Anastasija Sevastova. Puig had a great run at the Miami Open as she stunned second seed Caroline Wozniacki in the second round. However, she was defeated in the fourth round by American qualifier Danielle Collins. Seeded fifth at the Monterrey Open, Puig reached the quarterfinals where she lost to 2012 champion Tímea Babos.

Puig began her clay-court season in May at the Madrid Open. She was defeated in the second round by tenth seed, two-time champion, and eventual champion Petra Kvitová. Puig retired from her qualifying match in Rome at the Italian Open to Donna Vekić due to a right hip strain. As a result of that injury, she withdrew from the Internationaux de Strasbourg and the French Open.

Puig returned to action in July at the Wimbledon Championships where she lost in the first round to 13th seed and eventual semifinalist, Julia Görges. 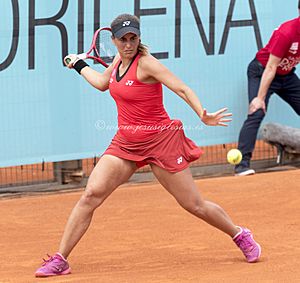 Puig started the new season at the Auckland Open where she was beaten in the second round by third seed Hsieh Su-wei. Puig was defeated in the final round of qualifying at the Sydney International by Aliaksandra Sasnovich. However, since Naomi Osaka withdrew from the tournament, Puig entered the main draw as a lucky loser, but she lost in the first round to Anett Kontaveit. At the Australian Open, Puig was defeated in the first round by Anastasia Pavlyuchenkova.

Puig retired from her second-round match at the Mexican Open to eventual champion Wang Yafan due to food poisioning. At the Indian Wells Open, Puig lost in the second round to 21st seed Anett Kontaveit. The following week, at the Miami Open, she was defeated in the first round by wildcard Wang Xiyu.

She started clay-court season at the Charleston Open and reached the semifinals where she lost to eighth seed and eventual champion, Madison Keys. After losing in qualifying at the Madrid Open and the Italian Open, Puig played at the Internationaux de Strasbourg. She reached the quarterfinals where she was defeated by second seed Aryna Sabalenka. At the French Open, Puig made it to the third round where she lost to Iga Świątek.

Puig missed the Auckland Open and the Australian Open due to her undergoing right elbow surgery.

Competing at the French Open, Puig lost her first-round match to 2012 finalist and qualifier Sara Errani.

Puig didn't play any more tournaments for the rest of the season. She ended the year ranked 105.

Puig has played one season of World TeamTennis making her debut in 2019 with the Vegas Rollers for their inaugural season. It had been announced that Puig wanted to return to the Vegas Rollers during the 2020 WTT season.

As of early 2020, Puig is dating Major League Baseball player Derek Dietrich. The two began their relationship in 2018. In August of 2019, Puig served a baseball to Dietrich from the mound before a game, in lieu of throwing out the first pitch.

All content from Kiddle encyclopedia articles (including the article images and facts) can be freely used under Attribution-ShareAlike license, unless stated otherwise. Cite this article:
Monica Puig Facts for Kids. Kiddle Encyclopedia.