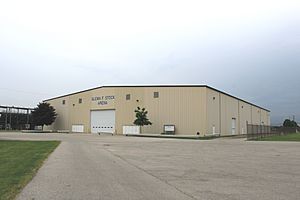 The arena measures 174 feet (53 m) wide by 252 feet (77 m) long with a 40-foot (12 m)-high ceiling. Although the Monroe County Fair's website hails the arena one of the "largest arenas in Michigan," this is actually not true as far as seating capacity is concerned; in fact, Stock Arena seats up to 3,500 for concerts. Many indoor arenas in Michigan have larger seating capacities. Also, several of them, including The Palace of Auburn Hills, Breslin Center, Joe Louis Arena, and Van Andel Arena have higher ceiling heights. Stock Arena is, however, Monroe County's largest arena and the largest in Toledo's northern suburbs.

Other amenities include a 100-foot (30 m)-by-210-foot pipe fence separating the stands from the arena floor, and a wireless PA system that can be used inside and outside the building.

Other facilities at the Monroe County Fairgrounds include:

All content from Kiddle encyclopedia articles (including the article images and facts) can be freely used under Attribution-ShareAlike license, unless stated otherwise. Cite this article:
Monroe County Fairgrounds Facts for Kids. Kiddle Encyclopedia.