Montana Highway 87 (MT 87) is a primary state highway located in the southwestern region of the U.S. state of Montana. The highway travels through mainly rural areas in Raynolds Pass, from the Montana–Idaho state line to an intersection with U.S. Route 287 (US 287). The route travels through a portion of Gallatin National Forest. In 1922, a road in the location of MT 87 was added to the highway system, and a few years later the road was designated as portions of two early auto trails. In 1959, the route was rapidly improved due to the collapse of US 287 nearby. During 1967, much of the highway was reconstructed along its current location.

On October 9, 1922, a road located in the general location of MT 87 was added to the Montana State Highway system. By at least 1924, an auto trail known as the Banff Grand Canyon Road ran along the highway in the general location of MT 87. The next year, the highway had been given a graded dirt surface, and was designated as part of the Great White Way auto trail, as well as the Banff Grand Canyon Road. Between 1925 and 1927, the auto trail designations were removed from the stretch of highway near present-day MT 87. By 1937, the main highway had been shifted north of the location of MT 87, and had been numbered as State Highway 1. A road remained in the location of MT 87, although it was unnumbered. This road had also been extended several miles northward to Lyon. 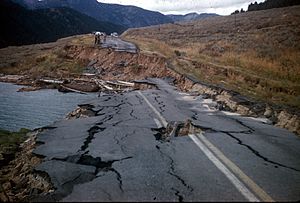 A portion of US 287 that collapsed along Hebgen Lake

By 1951, the highway had been reconstructed generally along MT 87's present location, and it had been upgraded to an improved gravel road. In 1959, the road in the location of MT 87 was rapidly improved in order to serve as an alternate routing to U.S. Route 287. Portions of US 287 around Hebgen Lake collapsed and crumbled as a result of the 1959 Hebgen Lake earthquake. After US 287 was fixed, the highway's importance decreased. In 1962, the portions of the highway from the southern terminus to present-day milepost 8.395 were reconstructed along the current location. In 1967, the rest of the highway was reconstructed along the present location. By 1987, the highway had been numbered as MT 87. The route had also been paved.

All content from Kiddle encyclopedia articles (including the article images and facts) can be freely used under Attribution-ShareAlike license, unless stated otherwise. Cite this article:
Montana Highway 87 Facts for Kids. Kiddle Encyclopedia.