Ennis is a town in Madison County, Montana, United States, in the southwestern part of the state. The population was 838 at the 2010 census. The elevation of Ennis is 4,941 feet (1,506 m) above sea level.

Ennis is served by the Big Sky Airport. 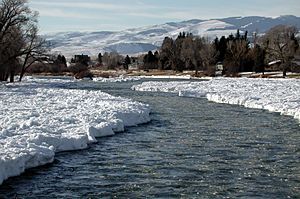 Madison River at Ennis in January

Photos of the Madison Valley Beast

In 1863, gold was discovered in Alder Gulch. This brought on "the rush." Two months later, William Ennis homesteaded the site along the Madison River that was soon to become the town of Ennis, his namesake.

In 1886 a mystery creature was noted for making livestock kills in the Madison Valley. A local rancher Israel Ammon Hutchins finally shot & killed the beast, after accidentally shooting one of his cattle, which was on the other side of some brush. A local taxidermist stuffed the canine. Jack Kirby (Hutchins' Grandson) tracked the mount to a Museum in Pocatello, Idaho, around 2007.

Avid Aircraft, a manufacturer of homebuilt aircraft, was located in Ennis. The company ceased operations in 2003.

The Thexton Ranch is located about 7 miles (11 km) south of Ennis, and is listed on the National Register of Historic Places.

There were 416 households of which 20.4% had children under the age of 18 living with them, 36.8% were married couples living together, 9.9% had a female householder with no husband present, 3.1% had a male householder with no wife present, and 50.2% were non-families. 42.5% of all households were made up of individuals and 20.4% had someone living alone who was 65 years of age or older. The average household size was 1.91 and the average family size was 2.60.

There were 367 households out of which 27.2% had children under the age of 18 living with them, 46.9% were married couples living together, 9.5% had a female householder with no husband present, and 40.1% were non-families. 36.0% of all households were made up of individuals and 11.2% had someone living alone who was 65 years of age or older. The average household size was 2.20 and the average family size was 2.87. 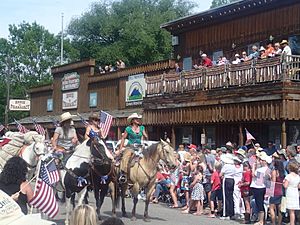 The Ennis Chamber of Commerce has organized an annual 4th of July parade since the early 1980s. In 2014, the Chamber hosted its 79th annual 4 July parade. The annual parade down main street in Ennis attracts visitors from throughout the U.S. and is considered one of the best small town parades in Montana. The 4th of July celebration in Ennis includes a rodeo event at the Ennis Rodeo Grounds just west of town. For at least the last decade, the Madison River Foundation, headquartered in Ennis has sponsored an annual 'Ennis on the Madison' Fly Fishing Festival in mid August. The festival attracts anglers and fly fishing luminaries from around the U.S. Each summer, Ennis hosts three long distance runs, collectively known as the Madison Trifecta. A duathlon is held over the 4th of July weekend between Ennis and Virginia City, Montana. A full marathon, the highest elevation run (over 9,000 feet (2,700 m)) in America is held in the Gravelly Range in late July. The Madison Triathlon is held in August of every year between Ennis and Harrison, Montana. In October, the Chamber of Commerce also hosts the annual Hunters Feed. It takes place the day before rifle season opens. Locals line up on Main St. and cook a wild game dish for the attendees to sample. In the past there has been elk, moose, deer, pheasant, and bob cat to try. A winner is chosen for the best chili, best non-chili dish, and most unusual dish. Ennis is also home to Montana's first combined brewery and distillery festival, Tap Into Ennis. The event occurs the third Saturday in May which coincides with the first day of fishing season on the Madison River. The Chamber hosts the event and invites Montana breweries and distilleries, artists, and local music acts. Ennis also hosts the Madison Valley Arts Festival, typically the second Saturday of August.

In 2012, a few miles south of Ennis, in restored wetlands along O'Dell spring creek and the Madison River, Montana Department of Fish, Wildlife and Parks and the Montana Audubon Society undertook a project to reintroduce trumpeter swans to the Madison valley. In August 2012, five trumpeter swan cygnets were released in restored wetlands. The goals of the project are to establish at least five breeding pairs of trumpeter swans through annual releases over five years.

All content from Kiddle encyclopedia articles (including the article images and facts) can be freely used under Attribution-ShareAlike license, unless stated otherwise. Cite this article:
Ennis, Montana Facts for Kids. Kiddle Encyclopedia.