Monterey Institute for Research in Astronomy facts for kids

The Monterey Institute for Research in Astronomy (MIRA) is an independent, non-profit, professional astronomical observatory dedicated to astronomical education and research, near Monterey, California. It is the first private observatory in the United States to open in the 20th century.

MIRA was founded in 1972. The acronym "MIRA" was chosen because of the unusual star of that name and the reference to the astronomical-relevant Spanish word for ‘look’.

The idea for an independent observatory came from Bruce Weaver and Craig Chester, then astronomy graduate students at Warner and Swasey Observatory, Case Western Reserve University in Cleveland, Ohio; the other founders were Donna Burych, Cynthia Irvine, Nelson Irvine, Albert Merville, Anne Merville, Hazel Ross, and Sandra Weaver. The group of "nearly penniless and doomed graduate students" were concerned how they would manage to work in astronomy. According to MIRA astronomer Arthur Babcock, during the early 1970s as "the glory days of space exploration were winding down" scientists decided they wanted a place where they could do long range research without the "demanding cycle of academia" and constant publishing. As observational stellar astronomers, they needed constant access to a large telescope. Working at the Kitt Peak Observatory in Arizona was a possibility but opening their own observatory was even better, it started off as a joke but over time and in discussion with the other close-knit students it became serious contemplation. A meeting at a lecture with astronomer Bart Bok, who was very enthusiastic about the idea, encouraged the students.

With Bok's influence and word-of-mouth, the Case students began to lecture at other campuses. During one lecture at the University of Maryland they "heard of a 36-inch mirror that was gathering dust at Princeton. It had been built by NASA as the backup for Stratoscope II ... and never used". Carl Sagan suggested that the Case students be invited to give a talk at the American Astronomical Society, where Weaver found Martin Schwarzschild who was then director of the Princeton Observatory, "eating breakfast alone and sat down with him"; this was an event known as '"the famous breakfast meeting"'. That discussion led to Princeton "indefinitely" loaning the mirror to the Case students.

Because the Case students had now gained access to the mirror and had received pledges from the other students, and because they were not tied to any specific institution, they only needed to find the location. They knew that mountain ranges "along the west coast of a continent" where the air was smooth from the ocean, "resulted in small sharp star images". This knowledge led the students to eventually select the Santa Lucia Range. Lick Observatory astronomers had been interested in a new observing station in that area. Students Albert and Ann Merville were sent to investigate locations, and they selected Chews Ridge which had an elevation of 5,082 feet (1,549 m). A dirt road and a fire tower nearby were other considerations in favor of the location. In 1972, the astronomers applied to the Forest Service for a use permit, and it was granted in 1974. Over the next couple of years, the Case students moved to Monterey County, and took part-time jobs in the area, in order to make a down-payment on 809 acres (327 ha) in Cachagua Valley, near the Carmel foothills.

Bruce Weaver recounts that the formation of Friends of MIRA happened in September 1978 "when 80 people assembled in Ansel Adams' house."

The influence of Bok and the nearness of Lick Observatory allowed MIRA to "receive a $76,000 grant from the Research Corporation ... to build a telescope around the 36-inch mirror". In 1975, as a training exercise, the Army Engineers finished the last half mile to the observatory. Bok and his wife — astronomer Priscilla — donated "their entire collection of journals and books". The library later received a "van full of professional journals" from astronomer Art Hoag.

The 5-year mission of MIRA in its beginning was to do a "spectral and photometric study of the brightest 125,000 stars in the northern sky", which was meant to "yield the data base for a generation of astronomers". The group decided that they would focus on the "'nonglamour area in astronomy'" — stars in our own galaxy. Studying how stars form and die as well as categorizing stars, "statistical studies and composition and properties of T Tauri stars ... and N-type Carbon stars. MIRA astronomer Nelson Irvine states "that is not the most glamorous area '... that means there's more chance to do important work'".

When the observatory opened its doors officially in 1982, it was the first private observatory to open in the United States in the 20th century. 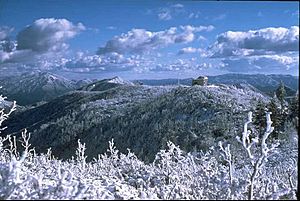 The MIRA research observatory is the Bernard M. Oliver Observing Station, and is located on Chews Ridge in the Los Padres National Forest at 36°18′20″N 121°34′00″W﻿ / ﻿36.30556°N 121.56667°W﻿ / 36.30556; -121.56667. Scientist Bernard Oliver gave the '"gift of a lifetime"' which was a quarter of the costs for construction of the Chews Ridge observatory. Chews Ridge was chosen for its cool weather and "steady airflow off the cold Pacific Ocean" giving astronomers "clear nights and sharp images". Also, the mountains block light pollution from the city of Greenfield allowing for "pitch-black conditions". The observatory has a full-time live in caretaker year-round.

The building was designed by amateur astronomer, architect Lawrence Bernstein. Described as looking more like a "ski chalet than an observatory" the building was designed to allow for the best viewing conditions. There is a roll-off roof, to avoid turbulence, and the building is set on a hollow pier to avoid air currents that might affect the telescope. A separate control room for the operator is located north of the telescope. The Chews Ridge area is littered with gun shells, so the designers felt it was important that the building be bullet-proof, and have angled windows to prevent a direct view of the inside. In preparation for fire, the walls are filled with gravel; if the outer wall burns, then gravel will be released to smother the flames.

The observatory houses a computer-controlled 36 inch Cassegrain telescope equipped with Spectrographs and direct cameras. The observatory is mostly self-sufficient with generators, batteries and solar panels. "A 16,000-gallon-tank collects rainwater, doing double duty by also helping to stabilize the telescope." Power comes from a windmill on the ridge. The Oliver station is one of the few that does not use a dome with a slit to look through, the whole roof slides back to expose the room. This avoids the problem of turbulence that the wind can cause when using a retracted dome.

MIRA offers community lectures, classes and events. They have a telescope lending program, and offer hands-on internships for local schools, as well as for the Naval Postgraduate School.

All content from Kiddle encyclopedia articles (including the article images and facts) can be freely used under Attribution-ShareAlike license, unless stated otherwise. Cite this article:
Monterey Institute for Research in Astronomy Facts for Kids. Kiddle Encyclopedia.