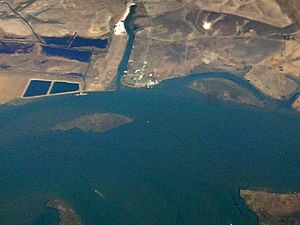 An aerial photo taken looking north in 2015. Montezuma Island can be seen on the right, east of Chain Island.

Montezuma Island is an island in Suisun Bay, an embayment of San Francisco Bay, and downstream of the Sacramento–San Joaquin River Delta. It is part of Sacramento County, California, and not managed by any reclamation district.

All content from Kiddle encyclopedia articles (including the article images and facts) can be freely used under Attribution-ShareAlike license, unless stated otherwise. Cite this article:
Montezuma Island Facts for Kids. Kiddle Encyclopedia.