Mormon Row is a historic district in Teton County, Wyoming, United States that is listed on the National Register of Historic Places 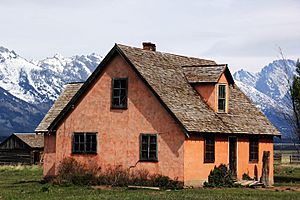 House on the John Moulton ranch, May 2012

The district consists of a line of homestead complexes along the Jackson-Moran Road near the southeast corner of Grand Teton National Park, in the valley called Jackson Hole. The rural historic landscape's period of significance includes the construction of the Andy Chambers, T.A. Moulton and John Moulton farms from 1908 to the 1950s. Six building clusters and a separate ruin illustrate Mormon settlement in the area and comprise such features as drainage systems, barns, fields and corrals. Apart from John and T.A. Moulton, other settlers in the area were Joseph Eggleston, Albert Gunther, Henry May, Thomas Murphy and George Riniker.

The area is also known as Antelope Flats, situated between the towns of Moose and Kelly. It is a popular destination for tourists and photographers on account of the historic buildings, the herds of bison, and the spectacular Teton Range rising in the background. The alluvial soil to the east of Blacktail Butte was more suitable than most locations in Jackson Hole for farming, somewhat hampered by a lack of readily available water. The Mormon homesteaders began to arrive in the 1890s from Idaho, creating a community called "Gros Ventre", with a total of 27 homesteads. The Mormon settlers tended to create clustered communities, in contrast to the isolated homesteads more typical of Jackson Hole.

The Mormon Row district was added to the National Register of Historic Places on June 5, 1997.

All content from Kiddle encyclopedia articles (including the article images and facts) can be freely used under Attribution-ShareAlike license, unless stated otherwise. Cite this article:
Mormon Row Historic District Facts for Kids. Kiddle Encyclopedia.