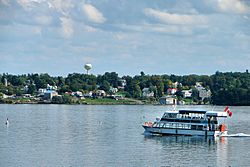 Morristown as seen across the St. Lawrence River

Morristown is a town in St. Lawrence County, New York, United States. The population was 1,974 at the 2010 census. The town is named after Gouverneur Morris, a signer of the United States Declaration of Independence and landowner in New York.

The Town of Morristown is on the northwestern part of the county and contains a village also named Morristown. The village and town are northwest of Gouverneur.

The town, part of Macomb's Purchase, was first settled permanently around 1808 on the site of the present Morristown village.

One of the first battles in the War of 1812 was a naval battle in the St. Lawrence River between two warships.

The town was established in 1821 from part of the Town of Oswegatchie, where it was known as "Haque.". Morristown was reduced twice to make new towns: Hammond (1827) and Macomb (1841).

Due to the lack of waterpower, a windmill was erected in 1825.

The north town line of Morristown is the international border with Ontario, Canada, defined by the Saint Lawrence River. The town is dominated by two major bodies of water: the St. Lawrence River and Black Lake, which defines the south town line.

There were 816 households, out of which 29.9% had children under the age of 18 living with them, 56.4% were married couples living together, 10.2% had a female householder with no husband present, and 28.7% were non-families. 23.9% of all households were made up of individuals, and 8.8% had someone living alone who was 65 years of age or older. The average household size was 2.50 and the average family size was 2.90.

Communities and locations in the Town of Morristown

All content from Kiddle encyclopedia articles (including the article images and facts) can be freely used under Attribution-ShareAlike license, unless stated otherwise. Cite this article:
Morristown (town), New York Facts for Kids. Kiddle Encyclopedia.