Mount Bosworth is located in the Canadian Rockies on the border of Alberta and British Columbia. The mountain is situated immediately northwest of Kicking Horse Pass and straddles the shared border of Banff National Park with Yoho National Park. It was named in 1903 after George Morris Bosworth, an executive and long-time employee of the Canadian Pacific Railway. 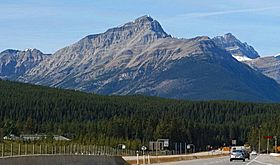 Based on the Köppen climate classification, Mount Bosworth is located in a subarctic climate with cold, snowy winters, and mild summers. Temperatures can drop below −20 °C with wind chill factors below −30 °C.

All content from Kiddle encyclopedia articles (including the article images and facts) can be freely used under Attribution-ShareAlike license, unless stated otherwise. Cite this article:
Mount Bosworth Facts for Kids. Kiddle Encyclopedia.