Mount Carroll is a city in Carroll County, Illinois, United States. It is the Carroll County seat. The population was 1,717 at the 2010 census.

Due to its elevation and northwesterly location, Mount Carroll is subject to unusually cold winter weather. From 1930 to 1999, Mount Carroll held the record for the lowest temperature ever recorded in Illinois, −35 °F (−37 °C), recorded on January 22, 1930. The record was beaten by Congerville in 1999, by one degree. 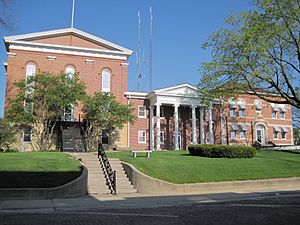 Mount Carroll began life as a mill town around 1841. In 1843, a referendum moved the county seat from nearby Savanna to Mount Carroll. The town was incorporated in 1855 and became a city in 1867; the first mayor was Nathaniel Halderman, a prominent local businessman and co-founder of the mill.

Shimer College was established in Mt. Carroll in 1853, but mounting debts forced a move to Waukegan in 1979. The campus now is home to several organizations, most notably the Campbell Center for Historic Preservation Studies. 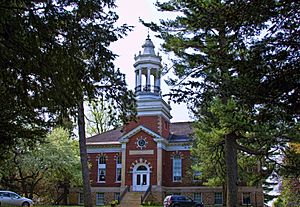 Mount Carroll enjoys a remarkable concentration of historically and architecturally significant structures. The bulk of the town's downtown and older residential area are included in the Mount Carroll Historic District, which encompasses 118 acres (48 ha) and was entered into the National Register of Historic Places in 1980. Mount Carroll is also home to the Campbell Center for Historic Preservation Studies, located on the historic former Shimer College campus near the south edge of town.

The Timber Lake Playhouse, the oldest semiprofessional summer stock theater company in Illinois, is located 4 miles (6 km) southeast of Mount Carroll. The Mount Carroll post office contains an oil on canvas mural, Rural Scene - Wakarusa Valley, painted by Irene Bianucci in 1941. Federally commissioned murals were produced from 1934 to 1943 in the United States through the Section of Painting and Sculpture, later called the Section of Fine Arts, of the Treasury Department.

There were 765 households out of which 29.0% had children under the age of 18 living with them, 54.4% were married couples living together, 8.0% had a female householder with no husband present, and 34.5% were non-families. 31.4% of all households were made up of individuals and 17.0% had someone living alone who was 65 years of age or older. The average household size was 2.35 and the average family size was 2.94.

All content from Kiddle encyclopedia articles (including the article images and facts) can be freely used under Attribution-ShareAlike license, unless stated otherwise. Cite this article:
Mount Carroll, Illinois Facts for Kids. Kiddle Encyclopedia.