Morrison is a city in Whiteside County, Illinois, United States. The population was 4,188 at the 2010 census, down from 4,447 in 2000. It is the county seat of Whiteside County. It is located on the Historic Lincoln Highway, the nation’s first transcontinental highway and in Morrison was the site of two concrete "seedling miles", which served as prototypes of what an improved highway could do for the nation.

In 1854, Lyman Johnson and H. S. Vroom were already in what would become the City of Morrison as contractors and builders for the Air-line railroad, now the Union Pacific Railroad. Johnson and Vroom, along with several other entrepreneurs, acquired the land that would surround the rail station that was planned here. They managed the work of surveyor W.S. Wilkinson in the layout of the future town in 1855. Among these entrepreneurs were W.H. Van Epps. Lyman Johnson decided to call the town Morrison, in honor of Charles Morrison, a friend of Van Epps and a wealthy merchant from New York, who promised financial support in the way of loans for the town’s development. Shortly thereafter, Morrison suffered severe financial losses and he was unable to participate, yet his name remained.

Morrison is located at the intersection of U.S. Route 30 and Illinois Route 78. It is 7 miles north of Interstate 88 (west) and 12 miles east of the Mississippi River. The Union Pacific Railroad runs through the town.

There were 1,713 households out of which 27.7% had children under the age of 18 living with them, 48.4% were married couples living together, 10.2% had a female householder with no husband present, and 36.6% were non-families. 31.0% of all households were made up of individuals and 16.9% had someone living alone who was 65 years of age or older. The average household size was 2.29 and the average family size was 2.84.

There are many parks and nature areas within and near the town. 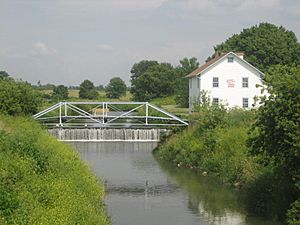 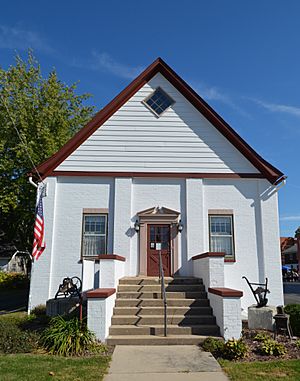 Listed on the National Register of Historic Places

All content from Kiddle encyclopedia articles (including the article images and facts) can be freely used under Attribution-ShareAlike license, unless stated otherwise. Cite this article:
Morrison, Illinois Facts for Kids. Kiddle Encyclopedia.