Savanna is a city in Carroll County, Illinois, United States. The population was 2,945 at the 2010 census, down from 3,542 in 2000. Savanna is located along the Mississippi River at the mouth of the Plum River. Going from north to south, the second automobile bridge between Iowa and Illinois is located just north of Savanna, and is part of U.S. Route 52. The bridge leads to Sabula, Iowa, which is across the river from Savanna. Savanna is also served by two major railroads, the Burlington Northern and Santa Fe Railway (BNSF) Railway Company and the (CP) Canadian Pacific. Savanna also has a small airport, The Tri-Township Airport (KSFY).

Savanna is protected by the Savanna Police, Fire Department and Ambulance Service. All three organizations maintain stations on Chicago Avenue. The three organizations were located in the same building (a throwback to when the fire department was responsible for the ambulance) but the original building only houses the fire department and one of the back up for Carroll County 911 dispatch. Savanna used to have its own hospital but this has since been converted to an assisted living facility, Pinnacle Place. All ambulance patients are transported to Mercy Medical Center in Clinton, Iowa or other Illinois hospitals. The Savanna Ambulance is one of two in the county to have paramedic certified members (a distinction shared with the Mount Carroll Volunteer Ambulance.)

In 1917, the United States Army purchased 13,062 acres (53 km2) of land about seven miles (11 km) north of Savanna to construct the Savanna Army Depot. Originally the land was to be used as a test range for munitions produced at the Rock Island Arsenal in Rock Island, Illinois. In 1921, the mission of the installation was changed to be a depot./. From WWII thru Vietnam, Savanna Army Depot served as a munitions maintenance and storage facility for traditional, chemical, and nuclear weapons.

With about 2,000 highly trained civilian employees holding Government security clearances working there in the '60s, this base was guarded and protected by the 516th Military Police Company, U.S. Army Materiel Command. Armed with .45 caliber sidearms, 12 gauge pump-action shotguns, state-of-the-art electronic surveillance systems, gas masks, etc. as standard daily issue, these 300 highly educated and very well trained MP's ensured 24/7 safety and security for all concerned. The 516th's primary mission, however, was to operate and defend what was then known as the "J Area" - where the munitions were actually stored and handled by civilian employees. Nothing went in or out of the J Area without MP scrutiny - including employee lunch boxes. Fast-forward ...

The Jo-Carroll Depot Local Redevelopment Authority (LRA) was established in 1997 by an intergovernmental agreement between the Illinois counties of Jo Daviess and Carroll to redevelop the former Savanna Army Depot.

These are some of the many companies that have chosen an area onsite called "Savanna Depot Park" as their home. 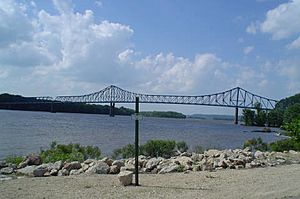 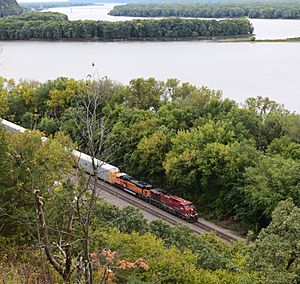 The downtown area has revived since the mid-1990s closing of the army depot with the addition of new ornamental lighting to complement the late 19th century buildings. The city is trying to draw more shops to the main street in hopes of becoming more of a weekend destination, like nearby Galena.

The Savanna Chamber of Commerce and other community groups sponsor several activities throughout the year that include; the annual Ladies Day Out Luncheon, a Memorial Day parade and ceremony, a yearly Riverfront Festival, Independence Day Fireworks, Halloween Parade and Haunted Forest, and a downtown Christmas Walk.

Savanna contains the only stoplight in all of Carroll County.

Savanna was the setting of a fictional zombie apocalypse in the novel The Melting Dead, written by Doug Lamoreux and published by Creativia Publishing in 2013. (ASIN: B00CKS9SFI, ISBN 978-1499160444) 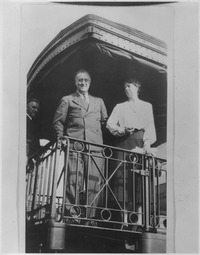 All content from Kiddle encyclopedia articles (including the article images and facts) can be freely used under Attribution-ShareAlike license, unless stated otherwise. Cite this article:
Savanna, Illinois Facts for Kids. Kiddle Encyclopedia.