Kids Encyclopedia Facts
This page is about the locality in South Australia. For the associated extinct volcano, see Mount Schank. 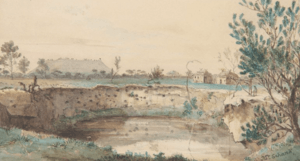 British colonisation of the area began in 1842 when brothers Edward and Fortescue Arthur (sons of Sir George Arthur) established the Mount Schank Station. The Arthur brothers were in continuous conflict with the local Bungandidj people from the time of their arrival. Many of their shepherds absconded, horses were speared and hundreds of their sheep were taken. The brothers had to do much of the shepherding work themselves and often engaged in close combat with "the Blacks". On one occasion Fortescue was slightly wounded after being speared. After capturing and chaining up a Bungandidj man, Edward forced him to reveal the location of their camp. An armed group of settlers was then organised by Edward and the Aboriginal camp was raided and destroyed, with six or eight Bungandidj being killed. The Arthur brothers could not sustain the effort of keeping the sheep station and with ruinous financial losses they sold out to Robert Leake of nearby Glencoe station in 1844.

The Clarke family then owned Mount Schank station for around 140 years before it was bought in 2005 by former Chairman of the AFL, Ron Evans. In 2017 the property was valued at around fifty million dollars.

Part of Mount Schank became a private sub-division of land within the cadastral unit of the Hundred of MacDonnell. Boundaries were created on 31 October 1996 for the “long established name.”

The 2016 Australian census which was conducted in August 2016 reports that Mount Schank had a population of 249 people.

Mount Schank is located within the federal division of Barker, the state electoral district of Mount Gambier and the local government area of the District Council of Grant.

All content from Kiddle encyclopedia articles (including the article images and facts) can be freely used under Attribution-ShareAlike license, unless stated otherwise. Cite this article:
Mount Schank, South Australia Facts for Kids. Kiddle Encyclopedia.