Kids Encyclopedia Facts
This page is about the mountain in Clallam County, Washington. For mountains with similar names, see Storm King Mountain.

Mount Storm King is located within the Olympic National Park about 20 miles west of Port Angeles, Washington. The mountain is located on the south side of Lake Crescent near Barnes Point, and has an elevation of 4,500+feet (1,370+m).

The trail to the summit starts near the Storm King Ranger Station, and initially follows the trail to Marymere Falls but branches to the north after a short distance. The first 1.9 miles (3.1 km) is on maintained trail but the rest of the climb involves scrambling on loose rock with some exposure. 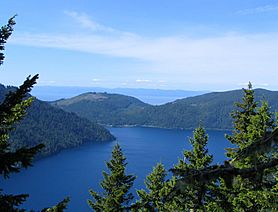 Taken June, 2006 on the summit trail. Lake Crescent is visible in the foreground, the Strait of Juan de Fuca in the background just over seven miles distant.

Klallum tribe legend tells an origin story of Mount Storm King being angered by fighting tribes at his feet and broke a boulder from his peak, throwing it at the warriors, killing them and cutting Tsulh-mut in two creating Lake Crescent and Lake Sutherland.

All content from Kiddle encyclopedia articles (including the article images and facts) can be freely used under Attribution-ShareAlike license, unless stated otherwise. Cite this article:
Mount Storm King Facts for Kids. Kiddle Encyclopedia.